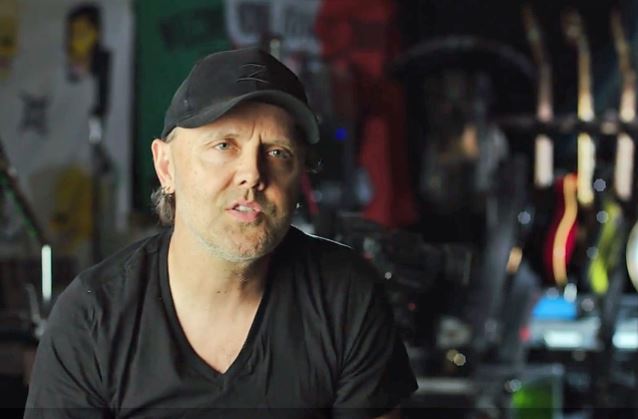 METALLICA drummer Lars Ulrich spoke to the New York Post about the response to the band's new single, "Hardwired". The song is the first taste of METALLICA's tenth studio album, "Hardwired…To Self-Destruct", which is due in November.

Lars said: "The response in the inner circle to our album has been very positive, beyond what we expected. But 2016 is like the Wild West in music. What happens when you put out an album is anyone's guess. We have access to all information, and the iPhone 7 will get it to us faster than last week's iPhone. But the downside is that everyone's got an attention span of about nine seconds, and then it's on to the next thing. So who knows how this album will connect?"

Ulrich went on to say that he is not bothered by incessant online criticism of METALLICA's every move. "Occasionally, for comic relief, I'll scroll down to see what ludicrous thing someone has written," he said. "Someone will say, 'Those guys were better when they were fucked up,' or, 'Those guys haven't been any good since before they started.' It's fine. It doesn't make an impact."

Unlike Lars, METALLICA's Kirk Hammett recently told Minneapolis radio station 93X that he is completely staying away from reading comments online about "Hardwired". The guitarist explained: "As soon as I go on to my computer and turn it on, and think to myself, 'Should I read what other people are saying?' or 'Should I read some comments [on whatever web site]?' I instantly say to myself, 'Don't go there,' because I'll just get, first, angry, then frustrated, then confused, and then wanna just write it all off as just fucking useless bullshit, and why did I even waste my time."

Hammett added that the reaction he has gotten has been largely positive so far, saying: "I kind of feel the excitement. I can kind of feel the energy in the air. I mean, we all kind of are picking up on it. I'm getting a tremendous amount of texts from friends, saying, 'Great song. Wonderful song.' I know there's a great buzz out there, and I'm totally, totally thankful that the song is so well received."

"Hardwired...To Self-Destruct" will be released on November 18 on double CD, vinyl and digital download.

METALLICA will begin touring in support of the record in January 2017.