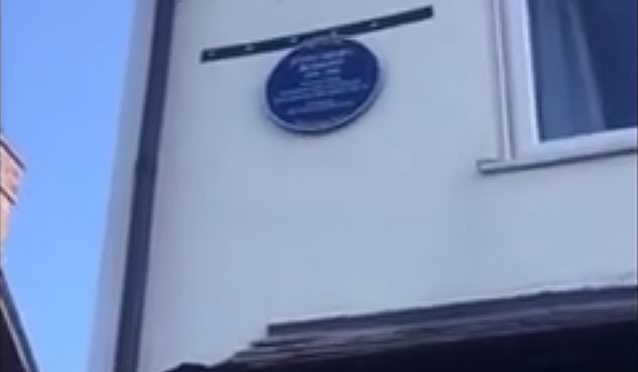 According to the Redditch & Alcester Advertiser, a plaque in honor of legendary LED ZEPPELIN drummer John Bonham was unveiled earlier today (Thursday, June 15) in his hometown of Redditch.

Former MOVE and ELO drummer Bev Bevan attended the event outside the the home John was born in on Birchfield Road in Headless Cross, where the plaque was revealed by the late ZEPPELIN legend's sister Deborah Bonham.

"I was absolutely delighted and honored to be asked to perform this ceremony," she said.

"John always stayed in Worcestershire and it is an amazing honor that he has been recognized in this way. I am sure wherever he is he is raising a glass to this with mum and dad to say thank you."

Bevan added: "John and myself were really close friends particularly in the late seventies and we had some wonderful times together. He was mad keen on cars and would seem to change them every month or so.

"We'd go to his house and there would be two drum kits, one for him and one for me, and a mini kit for his son Jason, who was only about five at the time.

"But to see him recognized like this is wonderful and the plaque looks great."

LED ZEPPELIN bassist John Paul Jones said that while some people mistook Bonham's powerful drumming style as a lack of control and technique; that was far from the case. "He wasn't musically out of control in any way," he said. "He knew just what he was doing. But he could take chances — as we all did in those days. Just take a lot of chances on stage. And it was great: sometimes it comes off, sometimes it don't."

Revealed! This is the moment Deborah Bonham unveiled a blue plaque in honour of her brother, Led Zeppelin drummer, John Bonham at his birthplace in Redditch.

It's part of BBC Music Day's celebration of local legends.