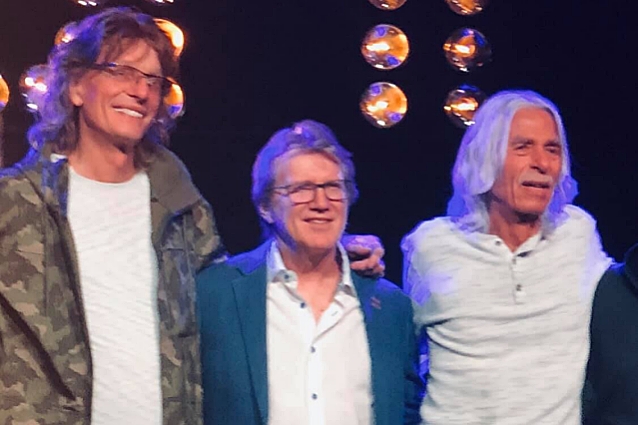 On Saturday, November 16, Canadian rock legends TRIUMPH reformed their classic lineup — consisting of drummer Gil Moore, guitarist Rik Emmett, and bassist Mike Levine — and played together publicly at an invite-only event to approx 300 "superfans" at MetalWorks studio in Mississauga (a suburb of Toronto),Ontario, Canada. According to former M.E.A.T. magazine publisher Drew Masters, the three-song set — which was taped for the forthcoming documentary "Triumph: Lay It On The Line" — was not only TRIUMPH's first performance in 11 years, but also its first as a pure three-piece power trio in 31 years. The tracks played were "When The Lights Go Down", "Lay It On The Line" and "Magic Power".

Produced by Emmy and Peabody award-winning Banger Films, "Triumph: Lay It On The Line" is a Crave original documentary that's a celebratory, exhilarating thrill ride through the history of one of rock's most unsung bands. Slated for release in 2020, the film covers TRIUMPH's humble beginnings as staples of the GTA circuit in the mid-'70s to their heyday as touring juggernauts, selling out arenas and stadiums all across North America with their legendary spectacular live shows — and way beyond.

"Mike, Rik and I are thrilled to revisit TRIUMPH's history, and especially to express our gratitude to our amazing fans," said Moore. "We are excited to be working with Banger Films and this documentary is our way of reaching out to all those people who have touched us along the journey to say 'thanks.'"

"Triumph: Lay It On The Line" will be right at home in the Banger Films catalogue, among such esteemed rock docs as "Rush: Beyond The Lighted Stage", "Super Duper Alice Cooper", "Iron Maiden: Flight 666", and, most recently, "ZZ Top: That Little Ol' Band From Texas". Featuring interviews with TRIUMPH, their contemporaries, their close friends and partners, and their fans, this film will be an all-access pass into the story behind the hit records and the light shows. Overflowing with unseen footage and unheard audio, this is a film for both the diehard fans and the casual observers, a story about the three friendships that formed the basis of one of Canada's most successful rock bands.

The film is produced by Banger Films in association with Revolver Films, Bell Media's Crave, Live Nation Productions and NBC Universal Canada. It is produced with the participation of the Rogers Documentary Fund and Slaight Communications Inc. International distribution by Round Hill Music.

Last fall, Moore told the "Ouch, You're On My Hair" podcast about the upcoming documentary: "Banger Films are really the bomb when it comes to these band documentaries. They just finished ZZ TOP, and TRIUMPH is right behind ZZ TOP. And previously did RUSH and they did THE TRAGICALLY HIP. They did 'Super Duper Alice Cooper', which everybody's probably seen that one now. And they also did IRON MAIDEN. So we're next in that series. And it talks a lot about the US Festival, it talks about San Antonio [where the band developed a a huge regional following], it talks about the issues, later on in our career, with the record label. It talks about all that stuff."

Moore, who owns Canada's largest music recording studio — Metalworks — and since 2005 has run a veritable "school of rock" in the same 50,000 square-foot facility in Mississauga, Ontario, was also asked if there is any chance of TRIUMPH ever playing shows again.

"It's really, really hard to say," he responded. "I don't bullshit; I just tell you the truth and where it's at. Times change, and I've gotten into a whole different career with Metalworks… Metalworks was originally a little recording studio with 10 people and now Metalworks has got a hundred employees, and it's a big operation, so I'm kind of tied down with that. I'm tied down in a good way. When I say 'tied down,' I'm doing what I love. My oldest daughter is the controller to the company, and I get to work with her every day. So that's my thing. It just comes down to hours in a day."

He continued: "I love TRIUMPH. I'm not gonna say that we won't play again. It kind of tears at my heartstrings, to be honest with you. I wish I could get 36 hours in a day instead of 24 and keep my drum chops up and do that kind of thing. Now, Rik [Emmett, guitar/vocals] just, in the last two or three days, he told me he's gonna play through the end of December and then he's gonna kind of wrap it up, for the most part, in terms of traveling and playing gigs.

"I know Live Nation approached us… They had lunch with Mike [Levine, bass] and I about six weeks ago. They want us to do a big show in Toronto next summer. And we [said], 'We're not rehearsed. We don't have a touring show.' [And they told us] 'We'll put something together — maybe a 'Triumph And Friends' [concert].'

"I never wanna say 'no' to it," Gil added. "I know that if we would get together, it would be for charity — that would be the motivation to do it; it would have to be charity of one sort or another. But honest to God, I can't promise anything. I'm not gonna B.S. you guys, I'm not gonna B.S. any TRIUMPH fans. Really, whatever will be will be, and I, Gil Moore, cannot predict how the ball will bounce."

Emmett has said in various interviews over the years that he would welcome the chance to play TRIUMPH songs with Moore and Levine again but that those two have been reluctant to commit. "If the carrot was big enough and golden enough, I think it would make Mike and Gil, but especially Gil, do it," Emmett told the QMI Agency back in 2012.