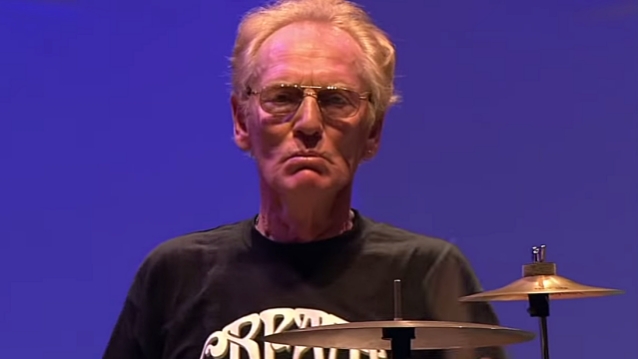 After previously announcing that he was critically ill and asking fans to "please keep him in your prayers," his family said Ginger "passed away peacefully" on Sunday morning (October 6) at a hospital in the United Kingdom.

"He was in no pain and had recently been able to see and speak to his children, close family and special friends," his daughter Nettie Baker told CNN in a statement.

Baker had experienced a number of health issues in recent years. In 2016, he underwent open heart surgery, which forced him to cancel a run of tour dates. During recovery, a fall also left him with swollen legs and feet. In 2013, he was diagnosed with chronic obstructive pulmonary disease, and he is also said to be suffering from chronic back pain as a result of degenerative osteoarthritis.

During his musical beginnings on the London jazz scene of the late 1950s, Peter "Ginger" Baker forged a name for himself for his unconventional drum setup and flamboyant style. In 1966, after seeing Eric Clapton play in London, he formed the power trio CREAM with Clapton and bassist Jack Bruce. Over the next two years, CREAM sold 15 million albums, scoring such hits as "White Room", "Strange Brew" and "Sunshine Of Your Love".

Baker, who gained a reputation as the most uncontrollable musician on the scene, was the subject of a 2013 documentary, "Beware Of Mr. Baker", which painted the title character as a chain-smoking, profanity-spewing, mean-spirited, entitled, grouchy, vile and self-destructive man with otherworldly talent and tragic flaws.