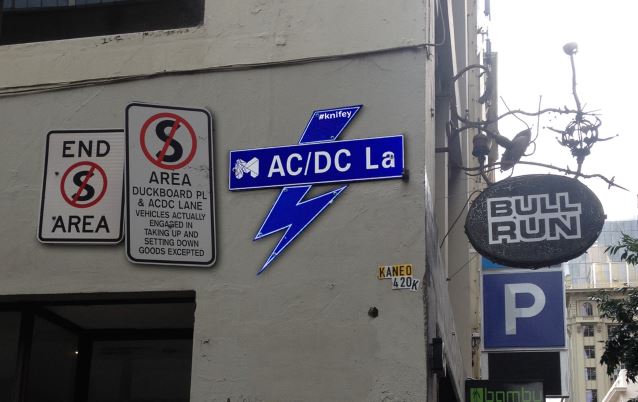 "Renegade street artist" Knifey and Melbourne, Australia's second largest city, have put aside their differences to commemorate the tenth anniversary of AC/DC Lane, working together to reinstall the iconic stolen lightning bolt street sign installation mounted to the lane-way wall back in 2004.

Originally illegally hammer-drilled into the concrete in the middle of a rainy spring night, the first lightning bolt installation was a light-hearted response to the naming policy of the Office Of The Registrar Of Geographic Names, who omitted the trademark separating stroke between AC and DC. The installation made appearances worldwide on news sites, social media, and the web (even landing a mention and photo on ACDC.com).

The bolt took on a life and notoriety of its own, celebrated by fans the world over, with a copy even being requested for The National Collection in Canberra.

To mark the tenth anniversary of the re-naming of Corporation Lane to AC/DC Lane in 2004, Knifey and the city of Melbourne are working together to install both new street signage and twin lightning bolts in the lane-way, to be unveiled on Wednesday, October 1 as part of Melbourne's "Love Your Lane-way" campaign.

Knifey said: "Melbourne City Council has demonstrated time and again its commitment to showcase both the city's lane-ways, and the street art that brings so many to visit the City of Melbourne. They have seen the benefit of encouraging legal street art in the city, and have been incredibly supportive of this project."

Cherry Bar in AC/DC Lane will hold a dual "Agent of Change/10th Anniversary Lane-way Party" on October 1, with free entry and kegs from 6 p.m. until 3 a.m. 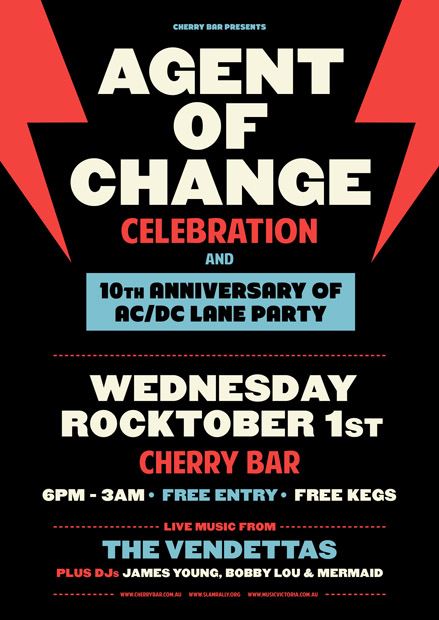