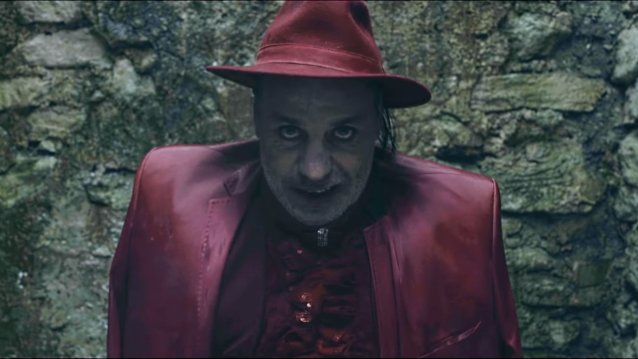 LINDEMANN, the project featuring vocalist Till Lindemann of German industrial metallers RAMMSTEIN and Swedish producer and multi-instrumentalist Peter Tägtgren (HYPOCRISY, PAIN),has released a "one-shot" music video for the song "Ach So Gern". The track is taken from LINDEMANN's second album, "F & M", which arrived in November. The follow-up to 2015's "Skills In Pills" was once again produced and mixed by Tägtgren.

Zoran Bihac, who directed the "Ach So Gern" video, explained in a statement: "In order to create an authentic atmosphere and draw real reactions from Till, we decided to shoot the interrogation scene in a one-shot. It was complicated because I also wanted to have the wide shot at the end within the same take, so we decided to shoot it with a drone. While Till is performing and getting beaten, the rotors had to start up and the drone had to be released at the right time. Till, our cast and the camera team had to synchronize perfectly to the timing of the song or else it wouldn't work. In the end, we decided it was best for the music video to cut in some other nice scenes, but I always had the idea to show the one-shot in its raw form some day."