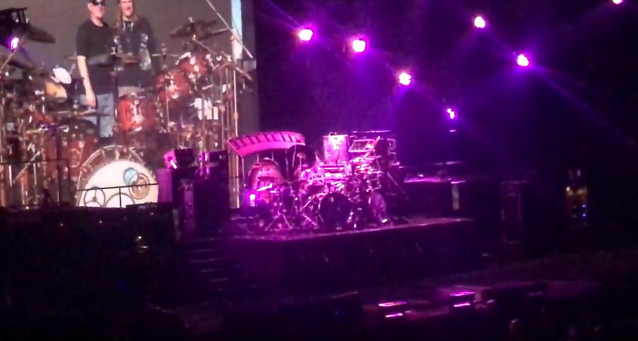 TOOL paid tribute to Neil Peart during the band's concert Friday night (January 10) at the Viejas Arena in San Diego, California. During Danny Carey's RUSH-tinged drum solo, a photo of Danny and the iconic RUSH drummer was projected on a massive screen behind the stage. TOOL also played a partial cover of RUSH's "A Passage To Bangkok" in tribute to Peart, whose death was announced earlier in the day and who was a huge inspiration for Carey. In addition, the "walk-out" music played after the concert was RUSH's "2112".

Five years ago, Carey and Peart joined former THE POLICE drummer Stewart Copeland for one of Stewart's "Super Grove" jam sessions. Copeland later shared video of the summit, a four-minute clip titled "A Little More Noise", via his YouTube channel.

Peart died on Tuesday (January 7) in Santa Monica, California after a three-year battle with glioblastoma, an aggressive form of brain cancer. He was 67 years old.

Tool honored him last night. Passage to Bangkok snippet before Jambi. Pic of Neil and Danny on screen before Danny played a Rush tinged drum solo and lights up walk out music was 2112. Exit Stage Left for this mornings walk. So bummed. Truly one of the greats.

Danny Carey is putting on we absolute display, as are the rest of @Tool. Fitting tribute to Neil Peart. Incredible.

A couple nice tributes to Neil Peart last night at the Tool show by @adamjones_tv and Neil's heir to the greatest-drummer-on-earth throne, Danny Carey. This clip is unrelated, though, just my favorite guitar solo of… https://t.co/gqmxhAM1gB