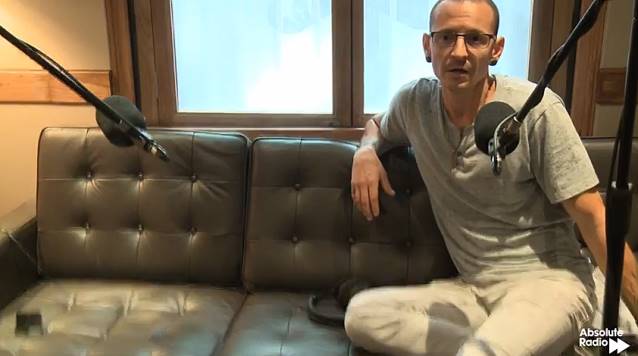 LINKIN PARK singer Chester Bennington rushed to the aid of an Absolute Radio camera operator during a recent interview with Pete Donaldson. You can see video footage of the incident below.

According to Absolute Radio, the camerawoman "is completely fine and recovered soon afterwards."

LINKIN PARK's sixth studio album, "The Hunting Party", is likely to sell between 100,000 and 110,000 copies in the United States in its first week of release, according to industry web site Hits Daily Double. The estimate was based on one-day sales reports compiled after the record arrived in stores on June 17 via Machine Shop Recordings/Warner Bros.

"The Hunting Party" follows up 2012's "Living Things" and features the singles "Guilty All The Same" and "Until It's Gone".

Guests on "The Hunting Party" include RAGE AGAINST THE MACHINE guitarist Tom Morello, HELMET mainman Page Hamilton, SYSTEM OF A DOWN axeman Daron Malakian and rapper Rakim.

LINKIN PARK will head out this summer with 30 SECONDS TO MARS and AFI on the "Carnivores Tour", which kicks off on August 8 in West Palm Beach, Florida.