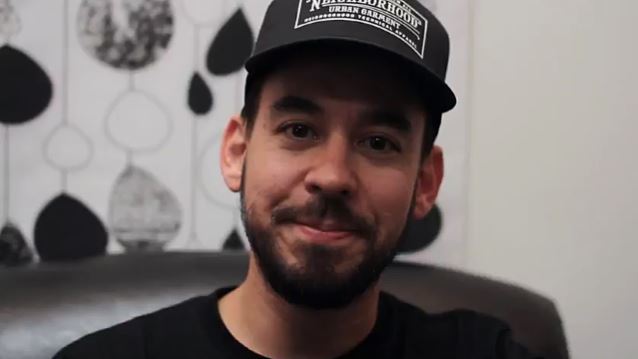 According to The Pulse Of Radio, LINKIN PARK MC Mike Shinoda said in a new interview with NME that even though the band got categorized as a nu metal act, they never actually identified with the genre. Shinoda explained: "We never held the flag for nu-metal — it was associated with frat rock. Arrogant, misogynistic, and full of testosterone; we were reacting against that."

Even though the band's 10-million-selling debut album, 2000's "Hybrid Theory", was widely credited with helping make nu-metal mainstream, guitarist Brad Delson told The Pulse Of Radio a while back that the band never wanted to stay locked into one sound. "We've tried to stay mindful that there doesn't have to be a box around the band," he said. "In other words, whatever it is in the studio that we're inspired to create, that can become the identity of the band, and that sonic identity definitely went through a number of twists and turns."

Shinoda added to NME: "As big as the band got, we always felt we had something to prove. Even now, that whole nu-metal tag is still there."

LINKIN PARK experimented with electronic music on 2010's "A Thousand Suns" and 2012's "Living Things", drawing a sharply negative response from fans, before getting back to a harder-edged sound on 2014's "The Hunting Party".

Shinoda revealed that he is already working on some ideas for the next LINKIN PARK album, adding: "I have no idea what it'll sound like yet. It won't sound like 'The Hunting Party'. We like to surprise people."

LINKIN PARK next plays at the Monster Mash Music Fest in Tempe, Arizona on November 1.