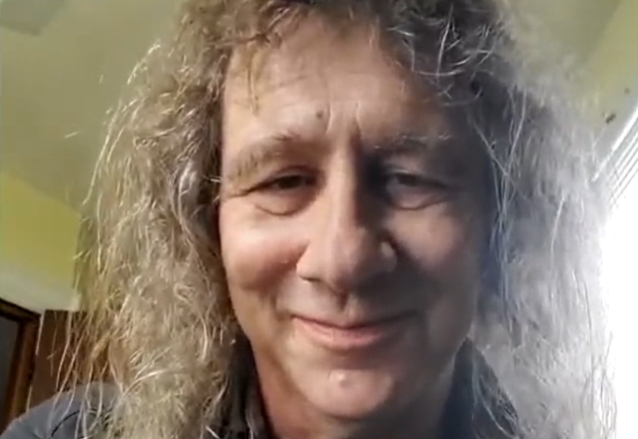 LIPS On ANVIL's Longevity: 'You Don't Do This Because You Wanna Make Millions Of Dollars'

In a new interview with RocklandSound, Steve "Lips" Kudlow of Canadian metal legends ANVIL spoke about the persistence, tenacity, endurance and commitment that has kept him and drummer Robb Reiner going for more than 40 years despite falling short of the commercial success achieved by some of the bands they influenced. The guitarist/vocalist said (see video below): "I just had a conversation with Jon Z, [founder of] CraZed Management, the guy that basically discovered METALLICA. We've been friends for 40 years, maybe more, and we were just talking about all this last night. It's doing this all for the right reasons. You don't do this because you wanna make millions of dollars; it's not what it's about. It's not about who sells the most records or anything like that. It's not a competition; it's not a horse race. It's art.

ANVIL, a Toronto-based group, was formed in 1978 by childhood friends Kudlow and Reiner. Both came from Jewish families and had been playing music together since their teens.

ANVIL gained popularity and new fans since the 2008 theatrical documentary, "Anvil: The Story Of Anvil", which is currently available on Netflix. The film focused on how ANVIL got together, and stayed together, through decades of hard work and setbacks.

ANVIL's latest album, "Legal At Last", was released in February via AFM Records. The disc was recorded at Soundlodge studios in Rhauderfehn in the northwest of Germany.