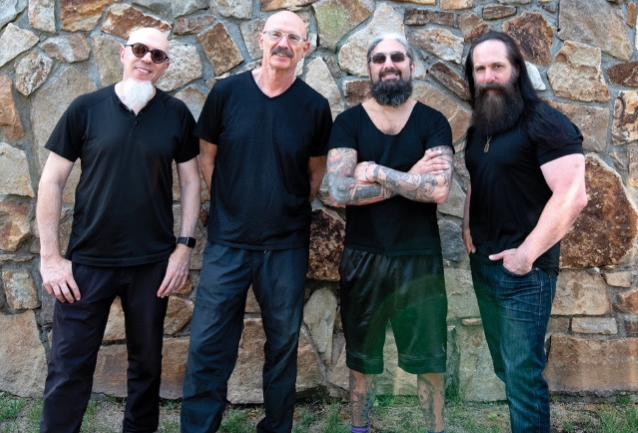 LIQUID TENSION EXPERIMENT, the instrumental progressive rock/metal project featuring DREAM THEATER keyboardist Jordan Rudess and guitarist John Petrucci, alongside ex-DREAM THEATER drummer Mike Portnoy and progressive rock icon Tony Levin (bass) of KING CRIMSON and PETER GABRIEL fame, has signed with InsideOut Music for the release of its third album. The effort is due in the spring, 22 years after the arrival of 1999's "Liquid Tension Experiment 2".

InsideOut Music label manager Thomas Waber said: "What happens, when you put four of the most talented musicians on the planet in one room? LTE. We all have been waiting for this album to happen for a very long time and it makes us very proud to be releasing this album. This one is for the fans!"

Added Petrucci: "We've all known Thomas Waber for a very long time, and Jordan and I recently discovered how great it was to finally get to work together when DREAM THEATER joined the InsideOut family a few years ago. There really is no better home for LTE, and we all look forward to doing great things together!"

Said Portnoy: "Myself and John have known Thomas Waber since we met on the very first DREAM THEATER European tour in 1993... Since then, I have worked with him and InsideOut for the past 20 years with TRANSATLANTIC, THE NEAL MORSE BAND and SONS OF APOLLO. When LTE finally reunited this summer, we knew there was no other label that we could call home."

A new LIQUID TENSION EXPERIMENT teaser trailer, created by Christian Rios, can be seen below.

This past May, Rudess addressed the prospect of a LIQUID TENSION EXPERIMENT reunion while filming a video message on Cameo, which lets users hire celebrities to record brief, personalized video messages about virtually any topic.

Asked if he thinks LIQUID TENSION EXPERIMENT will ever get back together, Jordan said: "Well, the answer is we are looking at our schedules, we are organizing a time. With the [coronavirus] pandemic, it's been a little difficult to coordinate personal kind of gatherings, but it looks very good, my friend."

Nearly three years ago, Portnoy posted a photo of him hanging out with Petrucci in a move that clearly represented a thawing of tensions between the two musicians who had been friends for more than three decades. More recently, Portnoy laid down the drum tracks on Petrucci's second all-instrumental solo album, "Terminal Velocity", which was released in August through The Orchard Music on John's Sound Mind Music record label.