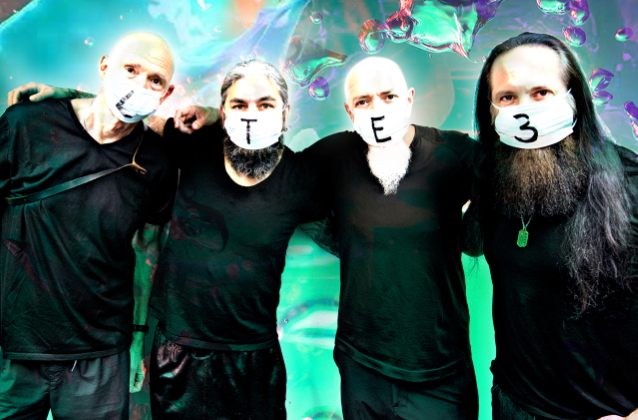 Earlier today, Rudess shared what appears to be a recent photo of the four members of LIQUID TENSION EXPERIMENT wearing masks, with each mask featuring either a letter of the alphabet or a number. The resultant phrase, "LTE3", is an apparent reference to the fact that LIQUID TENSION EXPERIMENT is working on its third studio album, the follow-up to 1999's "Liquid Tension Experiment 2".

This past May, Rudess addressed the prospect of a LIQUID TENSION EXPERIMENT reunion while filming a video message on Cameo, which lets users hire celebrities to record brief, personalized video messages about virtually any topic.

Asked if he thinks LIQUID TENSION EXPERIMENT will ever get back together, Jordan said: "Well, the answer is we are looking at our schedules, we are organizing a time. With the [coronavirus] pandemic, it's been a little difficult to coordinate personal kind of gatherings, but it looks very good, my friend."

Nearly three years ago, Portnoy posted a photo of him hanging out with Petrucci in a move that clearly represented a thawing of tensions between the two musicians who had been friends for more than three decades. More recently, Portnoy laid down the drum tracks on Petrucci's second all-instrumental solo album, "Terminal Velocity", which was released in August through The Orchard Music on John's Sound Mind Music record label.