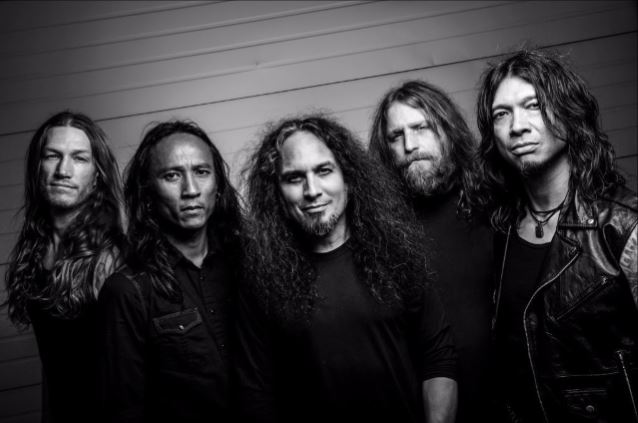 "Father Of Lies", a brand new song from San Francisco Bay Area metallers DEATH ANGEL, can be streamed below. The track is taken from the band's new album, "The Evil Divide", will be released on May 27 via Nuclear Blast. The CD was once again recorded at AudioHammer studios in Sanford, Florida with producer Jason Suecof (TRIVIUM, DEICIDE),who previously worked on 2010's "Relentless Retribution" and 2013's "The Dream Calls For Blood". Mastering duties were handled by Ted Jensen at Sterling Sound in New York City. The cover artwork was created by Tyrrell and can be seen below.

Regarding DEATH ANGEL's mindset going into the songwriting process for the new CD, Osegueda told Rock Hard magazine: "When we started working with Jason Suecof for the last two records, 'Relentless Retribution' and 'The Dream Calls For Blood', we thought we were gonna do two records intense like that and kind of go back [to the more] melodic [direction of 1990's] 'Act III', but the last two records, we've been loving so much writing that style, and the crowds have been enjoying them so much.

DEATH ANGEL will take part in a live performance and signing session on Thursday, May 26 at 5:00 p.m. at the Amoeba record store in San Francisco, California.