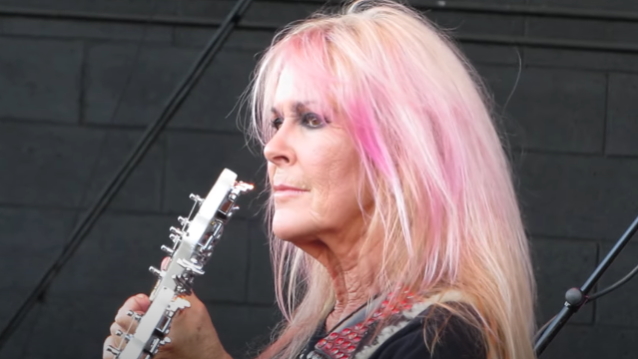 At this past Tuesday's (September 20) premiere of the first-ever career-spanning documentary on the life and times of legendary metal icon Ronnie James Dio at TCL Chinese Theatre in Hollywood, California, Lita Ford spoke to "The Blairing Out With Eric Blair Show" about the status of her long-awaited new solo album. The follow-up to 2012's "Living Like A Runaway" was once again helmed by guitarist/producer Gary Hoey, who contributes some guitar playing to the disc, alongside the rest of Ford's longtime backing band, consisting of guitarist Patrick Kennison, drummer Bobby Rock and bassist Marty O'Brien.

Lita said (as transcribed by BLABBERMOUTH.NET): "We do have a new record, and it's not out yet; it's not released yet. And basically what I'm doing is putting together a team of people who can give the album what it's worth, which is a lot. So I'm hoping that I can put together that team for 2023 and we'll have a new record out the beginning of 2023. Fingers crossed."

Lita said: "Marten brings to the stage a sound and high-energy dynamic style of bass guitar playing like a freight train hauling thunder through a hurricane."

Andersson added, "For those of you who haven't heard, Yessss I have indeed joined the Lita Ford band. I am super excited to join these awesome musicians and kind souls: Lita Ford, Patrick Kennison, Bobby Rock, and the great team around them. Can't wait for the upcoming tour dates and to get out and rock!"

He added: "My special thanks to my dear friend and long time Lita bass player Marty O'Brien for making this transition so easy and smooth. Good luck in DAUGHTRY brother. I will of course miss my STEELHEART bros (and all you Steeles out there) but I am planning to stay in your lives and I know STEELHEART will continue to slay without me and be better then ever."

Marty said: "Welcome to the Lita Ford family; Marten Andersson on the bass! Not only a fantastic bass player, but also a great guy and a dear friend of mine! #MartenRules."