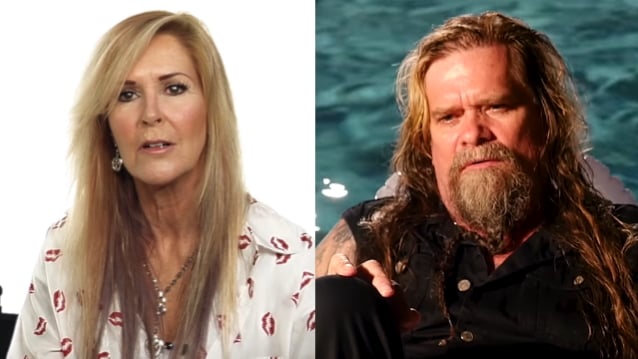 LITA FORD Looks Back On Her Marriage To CHRIS HOLMES: 'He Was A Handful'

During a recent appearance on SiriusXM's "Trunk Nation With Eddie Trunk", Lita Ford reflected on the experience of being married to former W.A.S.P. guitarist Chris Holmes three decades ago. Lita and Chris dated for two years after getting together in 1987. After a one-year engagement, they tied the knot in June 1990 and divorced in July 1992.

"He was a handful," Lita said. "I had to pick him out of the street a few times. You know, he's six-foot-six, so it's not like I can just walk over and, 'Hey, dude, I think I'll just carry you home.' We would walk down the street to the local pub, the local bar, and he couldn't make it home; he would just pass out. And I would have to pick him up and carry him back up the hill."

Ford also related a "pretty cool" story about a domestic incident involving her and Chris which apparently summed up their volatile relationship.

Asked if she actually destroyed the guitar, Lita said: "Yeah, of course. And Chris's response to that was, 'Well, are the pickups still okay?'"

Lita has spent the last couple of years writing and recording her long-awaited new solo album. The follow-up to 2012's "Living Like A Runaway" is once again being helmed by guitarist/producer Gary Hoey, who contributes some guitar playing to the disc, alongside the rest of Ford's backing band, which continues to consist of guitarist Patrick Kennison, drummer Bobby Rock and bassist Marty O'Brien.