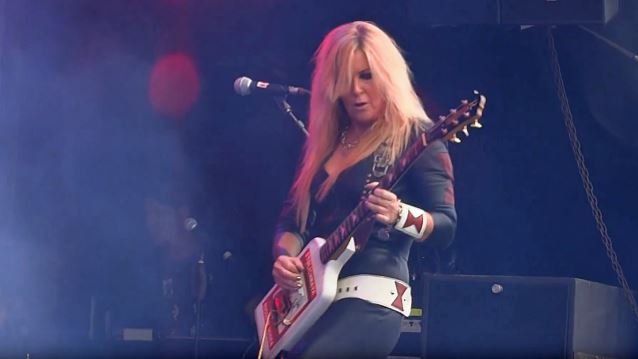 LITA FORD Reminisces About Her 'Piece Of Garbage' First Guitar

In a recent interview with the Green Bay, Wisconsin radio station 94.3 Jack FM, Lita Ford reminisced about what inspired her to start playing guitar. "It was natural," she said (hear audio below). "It wasn't any one thing that really inspired me — it was, 'Hey, mom, I want a Barbie doll. Why? I don't know — I just want one.' They never questioned the fact that I wanted a guitar, and I never questioned the fact that I'm a female and I'm going to be playing this guitar — like, is it a big deal? No, it's not a big deal; it's just a guitar.

"When I was 11 years old," she continued, "they bought me this Sears-model piece of garbage, and I learned to play on it. I actually could play LED ZEPPELIN, BLACK SABBATH, all these weird songs you normally would not play on a guitar of that stature. And then I said, 'Mom, Dad, there's something wrong with this guitar — it's not making the sounds that I really want to hear,' which was electric. They said, 'Oh, well, Lita, we'll buy you one with the steel strings.' So, rather than changing the strings on an acoustic guitar — it was, like, one of those mariachi guitars — they bought me another guitar. It was an electric/acoustic, and that wasn't it, either. [I thought,] 'What am I doing? What am I missing?'

"I went out and I got a job — by this time, I'm 14 years old — and I could not ask my parents for a third [guitar]. I just couldn't do it. So I went out, lied about my age and I got a job working in St. Mary's Medical Clinic, saved up $375 and went out and bought myself a chocolate Gibson SG. Now we're talking! I came home and figured out how to maneuver my father's Sony reel-to-reel tape recorder, and I plugged it in to the tape recorder, used it as an amplifier and next thing I know, I was rocking."

Lita is currently working on a new album with renowned guitarist Gary Hoey, who also produced her 2012 album, "Living Like A Runaway".

Ford told VintageRock.com last year that her next album would be "dark" and "riffy" with "lots of guitar."

Lita's last release was 2016's "Time Capsule", a collection of songs that were recorded by Ford in the past, but never before made available.

Ford's autobiography, "Living Like A Runaway: A Memoir", came out in 2016.