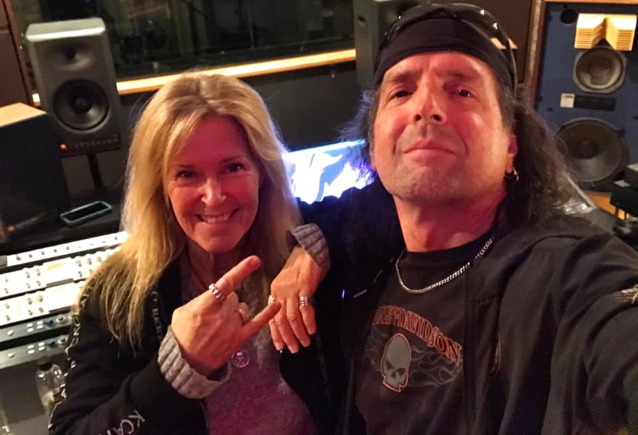 Lita Ford recently completed recording her long-awaited new solo album. The follow-up to 2012's "Living Like A Runaway" is once again being helmed by guitarist/producer Gary Hoey, who contributes some guitar playing to the disc, alongside the rest of Ford's backing band, which continues to consist of guitarist Patrick Kennison, drummer Bobby Rock and bassist Marty O'Brien.

In a new interview with Full In Bloom, Rock stated about the recording process for Lita's new LP: "She wound up kind of doing it backwards. Gary Hoey, the guitarist, is producing this record, like he did her last record. And what they would do is she would fly out to his studio in New England there, and they would build some tracks, work on some tracks. And they would put a drum machine track, but they would lay keeper guitar and bass and vocals and all that on top of these drum machine parts. And then, two or three months later, they may get together for another song, or who knows when, with their schedules. But long story short, they had a full album's worth of material, everything finished, except that it had these programmed drums. And the drums sounded fine, but it wasn't like real live drums. I said, 'Listen, Lita, we've played together seven, eight years now. You've gotta let me come in there and put some real shit on here.' And she agreed. It was challenging [last] year because she was ready to track drums in early 2020, and then studios were shut down and all that [due to the coronavirus pandemic]. So we would up finding a good room in Minneapolis where our booking agent has a really cool studio — private studio, but really high-tech and really cool. So we went there in September. So the drums were the last thing on it. And so the record's done, and they've got Max Norman on board, and he's starting to mix now. I haven't heard the latest update, but it's at the mixing stage now."

Asked about the musical direction of the new Lita material, Rock said: "It's arena rock. She's got some ballad kind of things on there — different shit — but it's big guitars and great melodies. It's cool. I think people will dig it."