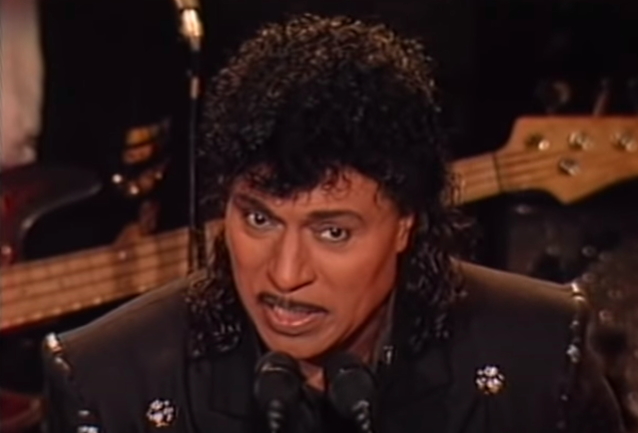 Jimmy Page (LED ZEPPELIN),Gene Simmons (KISS),David Coverdale (WHITESNAKE) and Charlie Benante (ANTHRAX) are among the rockers who have reacted on social media to the passing of rock legend Little Richard.

Little Richard, whose real name was Richard Wayne Penniman, died today (Saturday, May 9). His former agent Dick Alentold CNNLittle Richard died in Nashville with his brother and son by his side. Alen told CNN the cause of death is related to bone cancer. He called the musician "one of the legends, the originators" and said Little Richard had "been ill for a good while."

In the early '50s, Little Richard Penniman combined the spirit of church music, the bawdiness of blues and the swing of New Orleans jazz and turned it into something altogether new, rock 'n' roll. When the Macon, Georgia native signed to Art Rupe's Specialty Records, Little Richard began to develop his signature sound and flamboyant persona. His legendary debut album, "Here's Little Richard" (1957),was a bold introduction to the artist, featuring the iconic tracks "Tutti Frutti" and "Long Tall Sally".

RIP Little Richard, a very sad loss. My thoughts are with his loved ones.⁣
⁣
It’s Little Richard’s songs that pioneered rock’n’roll. I got to hear him and his band at the Newport Lounge in Miami and boy were they good. ⁣ pic.twitter.com/JXgahhJAfk

I was once asked, “If u could meet one person, who would it be?” I always said Little Richard. Because, to me, he was rock & roll’s most joyous, rebellious innovator.
Thank u for planting that seed, Richard. The world is a much happier place thanks to ur music.#RIPLittleRichardpic.twitter.com/kiq2VOZs8O

LITTLE RICHARD Is A Cornerstone In The Very Foundation Of Rock & Roll. An Icon. A Songwriter And Performer With A Personality To Match. RIP Superstar. pic.twitter.com/Sdl6Yh59ex

Sadly, Little Richard passed away today. A founding Father of Rock And Roll, his contributions simply can’t be overstated. I had the honor of meeting Richard in his later years and was awed by his presence. He told me, “I am the architect of Rock And Roll.” Amen! ..Rest In Peace. https://t.co/ceQuNU6pkF

In the late 1980s, I was walking down Hollywood Blvd, a black limo drove by slowly, Little Richard waved at us from the back window with a crazy look on his face. A giant in Rock and Roll music.

We've all lost another great one. One of rocks founding fathers. RIP. Thank you for the music and your friendship. "Good Golly Miss Molly!" pic.twitter.com/r1i6Skx5Ht

Little Richard is my kind of guy

We had the honor and pleasure of working with the great Little Richard when he starred in our video for “shelter me”. He was a true superstar, really funny and a heck of a nice person. #riplittlerichardhttps://t.co/y8NZeGrKtj

Little Richard was a performer so riveting, so extraordinary, that #JimiHendrix was his sideman and #JamesBrown his opening act. THANKYOU for everything. THANKYOU for rock n roll. https://t.co/9AiUcBaOhk

⚡️Little Richard⚡️The architect has left the building. I saw him headline a 50’s show at Madison Square Garden in the early 70’s. It was like being part of a Rock&Roll hurricane. RIP creator. #LEGEND #GOAT

Today we lost one of the Icons of Rock and Roll...I don't think Rock and Roll would have evolved the way it did without his dynamic and indelible style and performances... truly amazing!
A Legend that will always be loved and remembered as the heart and soul of Rock and Roll. RIP pic.twitter.com/R2A24ac2qN

So sad to hear that my old friend Little Richard has passed. There will never be another!!! He was the true spirit of Rock’n Roll! pic.twitter.com/yU1EJmjejU

I met Little Richard twice.
Once, for 30 seconds in an elevator-Hyatt/Riot House on Sunset in 1990.
Then at Kennedy Center Honors in 2000.
A solid hour in the room for rehearsals.
Both times felt like I was standing next to a nuclear reactor. Buzzing for real head to toe.
SG

God bless little Richard one of my all-time musical heroes. Peace and love to all his family. 😎✌️🌟❤️🎵🎶💕☮️ pic.twitter.com/H2lzKbX3tm

No @ledzeppelin just listen to the intro of “Rock and roll”sounds a bit like “Keep a Knockin”-met #LittleRichard a few times at the Hyatt on sunset, he was vibrant & talkative . He broke down huge walls and influenced many British lads- in turn that came back here to influence us https://t.co/i2nxFNEtlJ

R.I.P. Little Richard!!!! You were one of the PIONEERS of Rock and Roll...Without you, a lot of us would be playing a polka somewhere!!! Go to sleep King!!!! The band upstairs just keeps getting better!!! #Godblessthekingpic.twitter.com/gxWQsEoBM0

Little Richard, Went There. In the face of Segregation & Sexual Conformity. He made it possible for Lady Gaga to scream like the White Woman SHE is. https://t.co/8FFmYk0Xo9

Let's all let out a WOOOO! for a true rock and roll original, Little Richard. https://t.co/8vvGCw2gXo

I grew up on the music of Little Richard. He was one of my fathers favorites and therefore he became one of mine. He was an amazing musician, writer and singer who always delivered a song with an unmatched level of… https://t.co/pQcNAdSVBv

RIP...HUGE Influence & Inspiration on how I started projecting my voice...HUGE...Still Astonishes Me When I Hear Him Sing...
💖💖💖
Little Richard Dies At 87 | HuffPost https://t.co/tcgNl1iIu5

I’m very sorry to hear about Little Richard. He was there at the beginning and showed us all how to rock and roll. He was a such a great talent and will be missed. Little Richard’s music will last forever.
Love & Mercy, Brian pic.twitter.com/kcak6Rf4Re

RIP Little Richard. The man who invented It. Elvis popularized it. Chuck Berry was the storyteller. Richard embodied the Spirit of RocknRoll. Maureen and I were so honored being the first marriage he conducted. Were lucky to know him. He lives forever in the Underground Garage.

RIP To one of the originators of Rock n Roll https://t.co/fv19pIgwYI

#Repost@pjfarley
TJ Martell celebrity Softball game. L.A. in 92? Right before He started singing the national anthem he turns around to me Jani N says” help me out on this fellas R.I.P. Little Richard!
* Layne Staley in the left corner. . #rip#LittleRichard#LayneStaley#JaniLane pic.twitter.com/KKRgGJzEPC

God bless Little Richard.. he started a lot of us out. By listening and watchin..thank you. Your passion lives on...

I just heard the news about Little Richard and I’m so grieved. He was my shining star and guiding light back when I was only a little boy. His was the original spirit that moved me to do everything I would do.

Little Richard... way ahead of his time and paving the way for rock and roll. Just simply give Lucille a spin and listen to what this man was doing... in 1957! RIP Sir Richard https://t.co/0CKu0DOLSf

#RIPLittleRichard 🙏🏻 #legend I recorded w/ Little Richard... along w/ ⁦⁦@vanillaice⁩ and many more #1991. I showed up in Leather chaps w/ a Leather G-string 😆 Little Richard said, Lordy Lordy, we need to get this boy some britches 🙏🏾 https://t.co/pKgWPTijHt

RIP Little Richard 🙏🏽 Thankful for the Rock&Roll you brought the Universe 🌎🎶✝️ @NealSchonMusic@JourneyOfficial@mmercuriadishttps://t.co/w6LSJvdgej

Hey it’s so sad to hear about Little Richard. He constructed quite an image for himself but underneath he was a serious musician!
Rest In Peace and Rip it Up!

Little Richard thank you for everything you have created and given us. You inspired and still inspire! Jon Bon Jovi “ Blaze of Glory” session. #rocknroll#rocknrollstyle#rocknrollmusic@TAMAofficial@zildjiancompany@vicfirth@evansdrumheads@humesandbergpic.twitter.com/KBanxA2Rb2