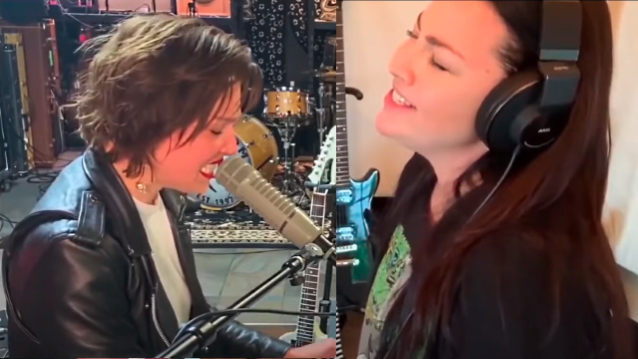 HALESTORM's Lzzy Hale and EVANESCENCE's Amy Lee have teamed up to record a new version of the HALESTORM song "Break In".

The reimagined version of the track, which originally appeared on HALESTORM's second album, 2012's "The Strange Case Of...", was recorded last October at a Nashville studio with producer Nick Raskulinecz, who had previously worked with both bands.

The new version of "Break In" will be released in August, presumably as a standalone single.

On Friday (May 8),Lee was a guest on Hale's Internet show "Raise Your Horns With Lzzy Hale", where the two also performed a quarantine rendition of "Break In" from their respective homes.

Speaking about the collaboration, Lzzy told Amy: "What I love about dueting on that song with you is that it started out as as love song that I wrote for my significant other" — referring to HALESTORM guitarist Joe Hottinger — "but when we sing it together, it's this act of unity, especially with the two of us being women and being women musicians. It's like we have each other's backs. And the lyrics mean something completely different when I sing it [with you]."

Regarding the way the new version of "Break In" was recorded, Lzzy said: "We did it performance-style, literally next to each other in the same room — from beginning of song to end of song, singing with each other.

"I've never done anything like that, but especially with a female singer of your prowess."

Amy added: "Nick always gets the challenge and gets the most out of me… So he made us stand there in the room and sing it live together a bunch of times. What that really means is that editing, you couldn't use when you did something cool but I messed up; it would have to be that we both nailed it for it to make the cut. So to do it in that way was really challenging and it was really cool and it fits the song so well.

"I remember you saying, and we both were saying, when we were listening back, it's really weird, at times — I know my part, but you can't pick out whose voice that is in that one particular moment, 'cause we started matching each other, 'cause it was on the spot. It's really cool how that happens.

"It feels like a match. It doesn't feel like any one person is pulling the other person along a little bit or leading the train. It really felt like an evenly matched dance."

Lzzy and Amy originally performed "Break In" together in 2012 during the "Carnival Of Madness" tour, which was headlined by EVANESCENCE and featured HALESTORM in the support slot. At the time, Hale told Zoiks! Online about how the live collaboration came about: "It's funny. We had talked in the beginning of the tour, 'Oh, we should do something.' What would we do? Do we do a cover? Do I come out during her set? She came up to me, I think it was two weeks in and said, 'I'm obsessed with your song 'Break In' right now.' I was like, 'Thank you so much.' Then she said, 'I know all of your parts, all the backing parts and everything.' I was like, 'Sweet, that's awesome.' Then she said, 'This is going to sound really weird and please feel free to say no, but do you think I could come up during that song and sing it with you?' I'm, like, 'Of course. This is awesome.' We didn't have a whole lot of time to rehearse. We literally ran through it once before our show in El Paso, right before the doors opened. It was perfect. I told her, queue insane crowd noise. She was like, 'Oh, I don't know.' 'No, seriously — they're going to freak when you walk out on stage.' ... [And] they did. We couldn't hear each other for the first four lines."

EVANESCENCE's long-awaited new album, "The Bitter Truth", will arrive this year. The disc's first single, "Wasted On You", came out last month and is the first in a series of songs that the band will make available from "The Bitter Truth" incrementally, culminating in the release of the full album.

Thank you again to my sistah from another mistah @amylee for being on my show #raiseyourhornswithlzzyhale ! The studio recorded version of #BreakIn will be unleashed to the world in August! Here’s a behind the scenes photo of Amy and I recording it together with @officialnickraskulinecz photo by @thejoestorm @wah_music @musicares #roadiestrong