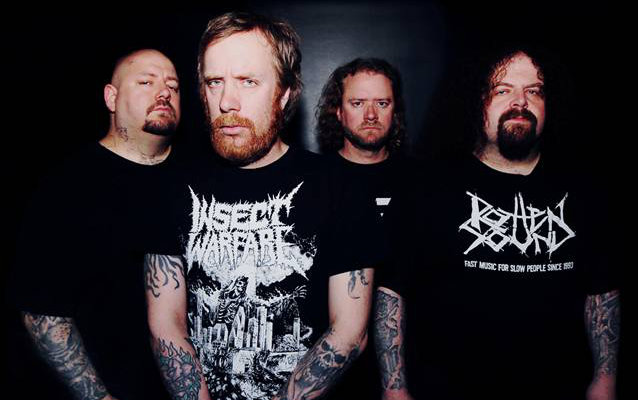 LOCK UP: 'New Material Is Sounding Off The Hook'

International grindcore "supergroup" LOCK UP — featuring Tomas Lindberg (AT THE GATES, DISFEAR),Anton Reisenegger (PENTAGRAM, CRIMINAL),Shane Embury (NAPALM DEATH, BRUJERIA, VENOMOUS CONCEPT) and Nick Barker (CRADLE OF FILTH, DIMMU BORGIR) — is "looking forward to another writing session for the new album in a couple of weeks down in the beautiful Basque region of Spain," according to posting on the band's Facebook page. The group adds: "New material is sounding off the hook and studio album #4 is gonna DESTROY!!!... Can't wait to share it with all of you."

LOCK UP's latest album, "Necropolis Transparent", was released in North America in July 2011 via Nuclear Blast Records. The CD was recorded in November-December 2010 at HVR Studios in Ipswich, United Kingdom and was mixed in January 2011.

Originally formed by Embury, Barker and Jesse Pintado (NAPALM DEATH, TERRORIZER) to blast out the most caustic, skin-flaying brand of deathgrind, LOCK UP was joined by the raw throat of Peter Tägtgren (HYPOCRISY) for its debut album, 1999's fearsome "Pleasure Pave Sewers", and Tomas Lindberg (AT THE GATES, DISFEAR) for 2002's "Hate Breeds Suffering", touring Japan and then falling into inactivity. Now joined by guitarist Anton Reisenegger (Chile's PENTAGRAM, CRIMINAL) in place of the late Jesse Pintado, LOCK UP is back in the most uncompromising style possible.