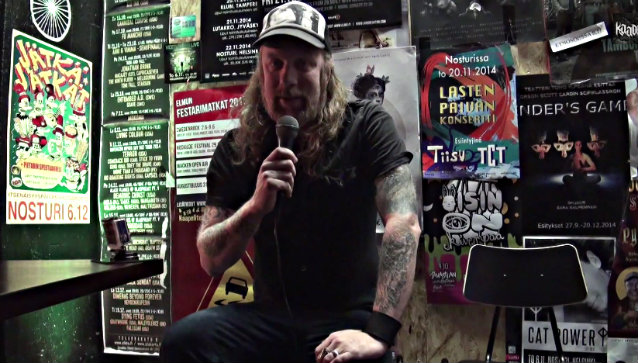 Speaking to Finland's Kaaos TV prior to AT THE GATES' November 22 concert in Helsinki, Lindberg said: "The current state of LOCK UP, actually, it's quite good. But this is pretty groundbreaking news, I think. For the first time ever [I am saying this publicly], I actually quit the band. Without any drama, but this is the first time I say it [in an interview]. But, yeah, we agreed to go separate ways because of logistic and time schedules, mostly. We're all friends, and they've got a new singer out, Kevin Sharp from BRUTAL TRUTH, who's a great friend of mine too. So everything worked out. There's no drama, there's no bad feelings. The only thing is I will miss it, 'cause I really liked to be in that band. But I think I will invent another project with the guys."

LOCK UP's latest album, "Necropolis Transparent", was released in North America in July 2011 via Nuclear Blast Records. The CD was recorded in November-December 2010 at HVR Studios in Ipswich, United Kingdom and was mixed in January 2011.

Originally formed by Embury, Barker and Jesse Pintado (NAPALM DEATH, TERRORIZER) to blast out the most caustic, skin-flaying brand of deathgrind, LOCK UP was joined by the raw throat of Peter Tägtgren (HYPOCRISY) for its debut album, 1999's fearsome "Pleasure Pave Sewers", and Lindberg for 2002's "Hate Breeds Suffering", touring Japan and then falling into inactivity. They were eventually joined by guitarist Anton Reisenegger (Chile's PENTAGRAM, CRIMINAL) in place of the late Jesse Pintado, LOCK UP.