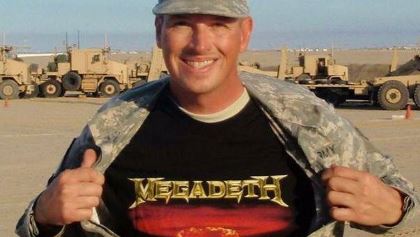 "It is with great sadness that we say farewell to one of MEGADETH's most loyal fans and friend, Patrick Dubas. Pat lost his life in a fatal car crash Tuesday morning, March 3 near 186th and State Street in Bennington, Nebraska.

"Pat was a staff sergeant in the U.S. Army Reserves as a transportation specialist for 23 years. He had served two tours in Iraq from 2003-2004 and 2007-2008, and one in Kuwait from 2009-2010. He served with the 172nd Transportation Company (disbanded) and the 443rd Transportation Company. With serving honorably in the U.S Army Reserve, Pat was also a military technician for the Department of the Army as a heavy mobile equipment repairer and a tool room specialist for 12 years.

"Pat was a loyal MEGADETH fan, Cyber Army club member and friend. Every year he would be excited to submit his Christmas card designs to the Megadeth Christmas Card Contest, and he holds the record for being in the Top 10, four times. He won the card contest in 2012 and was runner up in 2010, 2011, and 2014. He was already working on a Christmas card design for 2015. Pat had attended meet-and-greets with MEGADETH, would wear his MEGADETH shirts proudly at home and overseas, would correspond with us here at Megadeth.com on a regular basis, and even had a tattoo of Vic Rattlehead with a staff sergeant insignia.

"Pat had this special ability to brighten the day of anyone he came in contact with. Whenever you were in a group with him, the laughter from his humor was infectious. He was a great soldier, non-commissioned officer, a loving husband and dedicated family man leaving behind his wife, Terri, his two sons and a granddaughter.

"Thank you for your service and for being such a loyal fan and friend. We will miss you, Pat."

A WOWT.com video report on Patrick's death can be seen below.