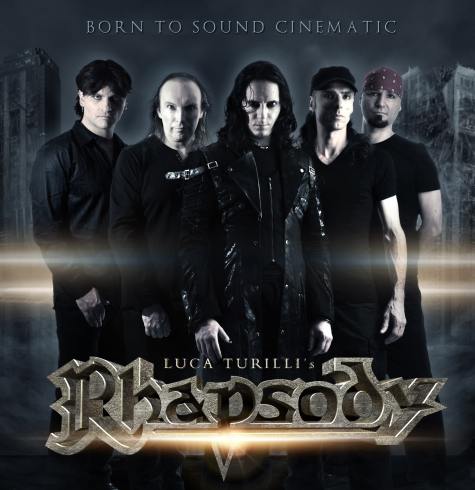 "Dark Fate Of Atlantis", the new video from the Italian "cinematic" metal band LUCA TURILLI'S RHAPSODY, can be seen below. The clip was filmed in Stockholm, Sweden by Swedish director Owe Lingvall of Dreamday Media (THE RASMUS, KAMELOT's "The Great Pandemonium").

"Dark Fate Of Atlantis" comes off LUCA TURILLI'S RHAPSODY's new album, "Ascending To Infinity", which will be released on June 22 via Nuclear Blast. The song was edited and made shorter for the video while on the CD it will appear in its original version of 6 minutes and 29 seconds.

Commented LUCA TURILLI'S RHAPSODY: "This video represents just the first step of the collaboration between RHAPSODY and Dreamday Media, the company of our friend Owe. He was just the right choice for a band willing to sound and look cinematic like ours. We share with him the passion for the cinema. We are amazed by his ability of turning our cinematic visions into reality and at the same time he loves the cinematic impact of our music. This means Owe is, and will be, our artistic partner at all effects, now and in the future. The first results of this unique collaboration will be announced very soon. Therefore please expect great visual surprises in the months to come, headliner tour included!"

RTN Touring and All Access, in association with Nuclear Blast and Owe Lingvall's Dreamday Media, are working right now on the "Ascending To Infinity Cinematic World Tour 2012/2013" which will bring the cinematic metal of RHAPSODY on the stages of the entire world.

In August 2011, RHAPSODY OF FIRE guitarist Luca Turilli and keyboardist Alex Staropoli announced their decision to go their separate ways.

Due to legal reasons, Staropoli will continue under the RHAPSODY OF FIRE name. Turilli, on the other hand, will make his future efforts available under the RHAPSODY moniker (RHAPSODY OF FIRE's original name),in which he will be joined by guitarist Dominique Leurquin, bassist Patrice Guers, singer Alessandro Conti (TRICK OR TREAT) and drummer Alex Landenburg (AT VANCE, ANNIHILATOR, MEKONG DELTA, STRATOVARIUS).

You can check out the "Ascending To Infinity" cover artwork below.

The album will have a running time of around 65 minutes.

In a recent interview, Turilli stated about "Ascending To Infinity", "Honestly, this album is very important for me, and personally, it is the one I always dreamed to record. The basic composition process lasted around five months. In this period of time I worked at the rhythm of 12-14 hours per day and, while very hard because very demanding mentally and spiritually, this was one of the most rewarding sessions of composition of my whole life. It rarely happened I had so much fun playing the guitar, the keyboards or my beloved piano and creating original classical parts, cinematic interludes, orchestrations and all the rest. As you know, I don't hire external people to orchestrate the music, but I do all by myself writing the music for each section of the orchestra, the choirs etc. and this sometimes can be a very long and hard process stealing a lot of time and energy. I cannot deny that this is a very ambitious album, because of the investment, artistic vision etc., and all the people working on it, Nuclear Blast included, are thinking the same."

Regarding the change in the production team for the LUCA TURILLI'S RHAPSODY album, Luca said, "After many years of work in Wolfsburg at the court of our friend Sascha Paeth, I decided to start this new artistic adventure with a different team of people. Sascha and the other friends of the Gate Studio (Miro, Olaf, Robert, Simon, etc.) are a winning team and their help in the past was really important for RHAPSODY. But it's since many years already that Alex and I took the productions in our hands, becoming producers of our own albums, despite Sascha remaining always fundamental as engineer and mixer man. His mixes will remain legendary and our list of thanks will be never long enough for all the professional contribution he gave. All the years of work, fun and sufferance in the Gate studios of Wolfsburg will surely remain unforgettable and are carved in our heart. For LUCA TURILLI'S RHAPSODY and the new band adventure, I decided to change the studio and the main man behind the console. We [recorded] the new album at the Backyard Studio of Kempten, Germany. Our new engineer and main mixer man is the same owner of the studio and his name is Sebastian Roeder, the person who worked for RHAPSODY OF FIRE in the last worldwide tour making real miracles while mixing our music live. Apart from being a talented engineer, he is a great person and he shares with us the love for this style of music."