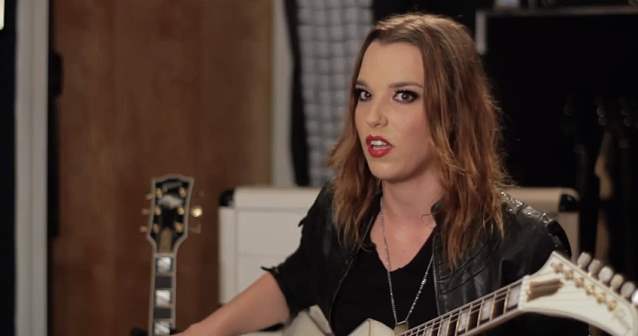 According to The Pulse Of Radio, HALESTORM singer Lzzy Hale, IN THIS MOMENT vocalist Maria Brink and actress-turned-rocker Taylor Momsen of THE PRETTY RECKLESS have all made the annual "100 Hottest Women of the Year" list published by GuySpeed, one of the web's leading men's entertainment sites. Hale came in at No. 90, while Brink made it to 69 and Momsen climbed all the way into the Top 20 to land at No. 14.

Other female rockers who made the list included LACUNA COIL's Cristina Scabbia, BUTCHER BABIES co-vocalists Heidi Shepherd and Carla Harvey, Mariqueen Maandig of HOW TO DESTROY ANGELS and more. No. 1 on the list was rap artist Nikki Minaj, with Oscar-winning actress Jennifer Lawrence right behind her at No. 2. Other Top 10 women included singer Katy Perry, model Kate Upton and "Blurred Lines" video star Emily Ratajkowski.

Hale told The Pulse Of Radio a while back that she believes it can be too easy sometimes for female musicians to rely solely on their looks. "Actually, I've been encouraging a lot of people to challenge us, and make sure that when you're reading these articles or you're seeing us in magazines or something, that you go and you check us out live, or you go and you sample a CD, something like that," she said. "If people start doing that and don't just look at us because we're a quote-unquote pretty face, or scantily clad — I think if more people were looking beyond that, it would make us step up a little bit."

Four bands featuring female members, including LACUNA COIL, SICK PUPPIES, EYES SET TO KILL and CILVER, will head out next month on the 2014 "Hottest Chicks In Hard Rock" tour, which kicks off on February 20 in Wilmington, North Carolina.

IN THIS MOMENT is on the road right now, while THE PRETTY RECKLESS starts a run on the 2014 SnoCore Tour on January 29 in Lincoln, Nebraska. HALESTORM is working on its third album, scheduled for release this summer.