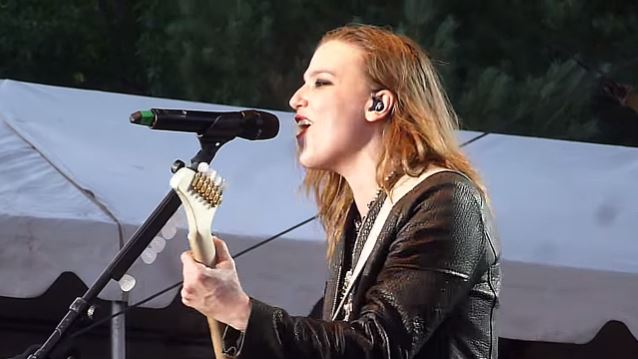 On January 30, the four members of HALESTORM were interviewed on the 100.3 The X Rocks radio station in Boise, Idaho. You can now listen to the chat in the YouTube clip below.

Speaking about HALESTORM's third studio album, "Into The Wild Life", which will be released in Europe on April 3 and North America on April 7, singer Lzzy Hale said: "This whole recording process, both musically and lyrically, was very freeing. We decided to throw away everything that the previous two records made us feel comfortable and safe. We threw caution to the wind and said, 'We're just gonna chase after whatever gets us excited.' And we made an actual album. We did in Nashville, so it was kind of isolated, and and there wasn't a whole lot of distractions besides the occasional beer run."

She continued: "We did this recording process differently too. Instead of doing it assembly line and everybody has their turn with their part, we ended up doing all the basics live. So it was the four of us in this beautiful church in Nashville, just standing in a circle, playing through these songs and recording and trying to [get] everybody [to] catch the same wave."

On the topic of HALESTORM's songwriting approach on "Into The Wild Life", Lzzy said: "We're at a point in time in our life that we decided we just really wanted to be stoked about what this record was gonna be and with all these songs. And so we weren't necessarily thinking about, 'Oh, man, is this gonna work for our label or management? Are people gonna like this?' We kind of realized that we make music selfishly, because we like it, and we make it for us, and we don't necessarily do it for approval. Which maybe that had been different in the past couple of years."

She added: "I don't know… It was a lot of fun just to get in there and have it start and end with us — the four of us."

"Into The Wild Life" follows up HALESTORM's Grammy-winning 2012 sophomore effort, "The Strange Case Of…"

HALESTORM is currently touring with Eric Church and has announced a series of live dates with THE PRETTY RECKLESS that will begin in late April.