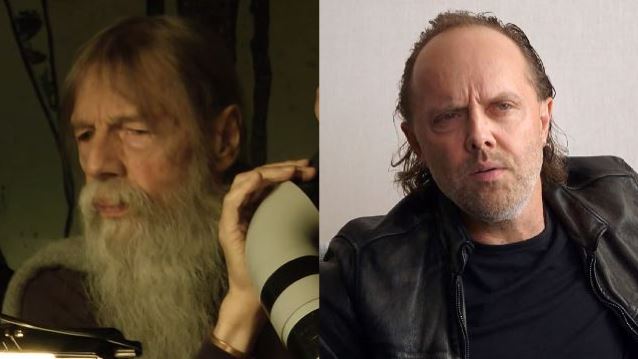 METALLICA drummer Lars Ulrich joined his father, 86-year-old Danish musician, filmmaker and former tennis pro Torben Ulrich, on stage on October 26, 2014 at HAUT i Huset i Magstræde in Copenhagen, Denmark for an improvised set of experimental music as part of last year's Wundergrund festival. They were joined during the performance — which was witnessed by around 150 people — by pianist, composer and improviser Søren Kjærgaard and special guests Claus Bøje (drums) and Peter Friis Nielsen (bass).

Speaking to Jason Saulnier of Music Legends about the experience of playing with his son, Torben said: "The circumstances, I thought, were interesting, and I thought we had sort of a precious moment, if you will. And then later on, it could be evaluated, or whatever you call that, and then some people say, 'That was a lot of shit,' or 'just a lot of noise' or 'nobody really coming together' or something. But, at the same time, we tried it, and then that's what it was."

He continued: "You asked if that was a precious moment, and it was, but it was also kind of… Let's say… For you to understand that… Let's say… We, meaning our group that was playing with a drummer with a long, long time, and his name was Claus Bøje. And when Lars grew up, and when he was little — let's say 45 years ago or more, when he was 3 or 4 years old — Lars said, 'When I grow up, I want to be an ice hockey player and a drummer like Claus Bøje.' And so, all of a sudden, we had this idea, 'Maybe Lars would join us, and then we would have these two drummers.' But the relationship between them was kind of the interesting thing here, if you will. Of course, you would say also, from a more public point of view, and Lars and METALLICA and all that, it was sort of, 'Lars is playing with his father there for the first time.' So it had that kind of thing also. But from the more internal thing, it was a little bit like Lars playing with an old icon, or whatever you call that. So, in some sense, to us, it was… Whether it had some enormous musical value or something, that's a different thing almost to the fact itself that we did it or something."

According to Torben, Lars relished the opportunity to play with his father and Bøje, especially when you consider the fact that "in some sense, [Lars] was the one that had to step outside of his sheltered field, if you will," Torben said. "And, on the other hand, he has also grown up with hearing a lot of free forms of music and stuff like that. And also we made together a film [2002's 'Before The Wall: Body & Being'] where he made the sountrack, I don't know if it was ten years ago or twelve or something, where I thought he played very well. He was alone and just watching the film, the video track of it, and then he was blending with the acoustical aspects of the audio. And, in some sense, I thought that's some of the more interesting things that I've heard from him. So, in some sense, I was thinking, yeah, he can do that if he wants to."

Check out a photo gallery of Lars' performance with his father at Gaffa.dk. More photos are available below.

Torben Ulrich and Søren Kjærgaard have made three albums together: "Suddenly, Sound: 21 Songlines" (2009),"Alphabet, Peaceful, Diminished: 29 Proposals From The Towers Of Babble" (2010) and their latest release, "Meridiana: Lines Toward A Non-Local Alchemy", which came out last October via Escho.

Torben Ulrich, who is said to be METALLICA's biggest fan and its biggest critic, famously told his son "I would delete that" when asked for an opinion of a new song during the writing sessions for what became 2003's "St. Anger" album — a scene immortalized in the "Some Kind Of Monster" documentary. Torben added, as Lars laughed uncomfortably. "For me, it doesn't cut it. It sounds like a guy shouting in some kind of echo chamber."

Asked in a 2005 interview if he was disappointed that Lars didn't pursue tennis as a career, Torben said: "No, no. The main thing was that he do what he thought was his choice — not our choice. But in order for him to know that more clearly, we encouraged him to leave Denmark for a year and travel to Florida, to a place called the Nick Bollettieri Tennis Academy. He went there when he was 13 or 14. He was very interested in tennis at that time, but he was also very interested in music. After a year, he still wanted to go out and listen to the concerts and I think at the Academy they were not so keen that he stayed out, so he was reprimanded there for keeping some late hours."

In a 1995 interview, Lars Ulrich, who turned 51 in December, stated about his childhood: "I grew up in as open an upbringing as you can imagine. Americans would call it spoiled. But I was very independent. I had nothing tying me down. At the same time, anything I wanted I had to get it myself. It's 1975, and I want to go see BLACK SABBATH. As far as my parents were concerned, I could go see BLACK SABBATH 12 times a day. But I had to find my own means, carrying the paper or whatever, to get the money to buy the tickets. And I had to find my own way to the concert and back. From that point of view, I was left alone a lot. But in terms of culture, there was always shit going on around the house.

"My dad was always around music He was hanging out with Sonny Rollins, Don Cherry, Dexter Gordon. Dexter Gordon was my godfather. I used to play with Neneh Cherry when we were little kids. Her stepfather, Don Cherry, lived like six houses from where we lived in Copenhagen. Those types of people were always around.

"Even though tennis was his main source of income, my dad was also writing about jazz in the papers in Copenhagen. Miles Davis and Ornette Coleman were always playing in the stereo around the house. Later it was THE DOORS and Jimi Hendrix."