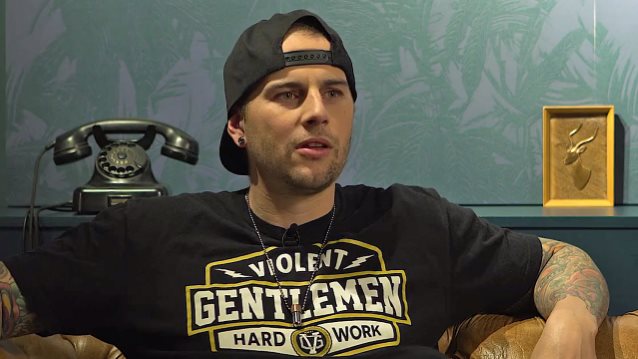 M. SHADOWS Says 'It Would Be Awesome' For AVENGED SEVENFOLD To Be Inducted Into ROCK AND ROLL HALL OF FAME

AVENGED SEVENFOLD singer M. Shadows recently spoke to the 102.7 WEBN radio station about the possibility of his band one day getting inducted into the Rock And Roll Hall Of Fame. "The thing with the Rock And Roll Hall Of Fame is it's a lot of bands that are… they have a lot of success but also a lot of critical acclaim, and I don't think AVENGED SEVENFOLD has really had much of its due in terms of that [from] the people that vote for it or bring these bands up," M. Shadows said (hear audio below). "But I think with [the latest AVENGED SEVENFOLD album] 'The Stage', we've seen that kind of change a little bit. There's actually major publications that are respecting us now, where they didn't really respect us or the genre for a long time. So who knows, at some point? And it would be awesome, because fans love that kind of thing."

There haven't been that many metal or hard rock acts inducted into the Rock Hall: BLACK SABBATH, METALLICA, AC/DC, DEEP PURPLE, GUNS N' ROSES, VAN HALEN and LED ZEPPELIN, to name a few.

DEEP PURPLE was eligible for the Rock Hall since 1993 but didn't get inducted until last year.