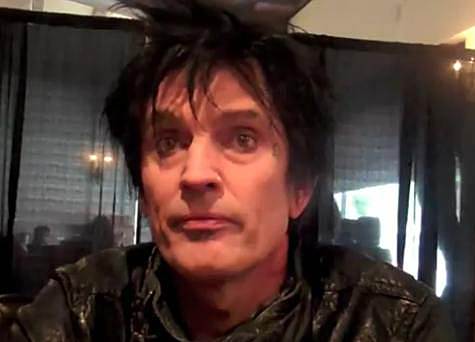 MÖTLEY CRÜE and KISS's co-headlining tour — dubbed simply "The Tour" — kicked off on July 20 in Bristow, Virginia and is currently scheduled to wrap on September 23 in Hartford, Connecticut. Although the bands are officially co-headlining the tour, MÖTLEY CRÜE is opening for KISS each night.

MÖTLEY CRÜE drummer Tommy Lee recently explained to VEVO how he knows when a particular show is really happening. "The crowd is a pretty good indicator when it's good, because it's kind of a universal energy that gets passed around," he said. "The crowd's rocking to it — that's a good sign. And then we know. We just know. It's those little nuances where somebody does something and you know they're going to do it and they did it and it's a weird feel kind of thing. I don't know how to put it into words, but you've been together so long you just know when you're really connecting. It could be from the way the song started, just perfectly… or the way it ended. There are things you do that just come natural, and sometimes those are amazingly in synch and sometimes they're horribly out of synch and you're like, 'Ooo! That wasn't very good tonight.' Most of the time it's just on."

It's often said the drummer's got the most physical job, and Lee — who is considered by many to be one of rock's most visual performers — says that playing live almost every night makes it hard for him to keep weight on while on the road. "It gets pretty gnarly," he said. "I've told this story before, but it's kind of fun if you don't know it. I was curious because after a show, y'know, I'm whupped man, and I'm like, 'I'm curious. I'm going to get one of those pedometers that joggers put on their shoes.' The things that tell you how far you go? I was curious, like 'Man, I know I've got to be getting some miles in — no question.' I put it on and after the show I took it off and I looked down and it said 13.1 miles. I was like 'What? That's insane, dude!' No wonder I can't keep weight on and I'm a skinny fucker. Because I sweat — I must sweat ridiculous amounts…"

Earlier this month, MÖTLEY CRÜE released "Sex", the first studio track from the band since the June 2008 release of "Saints Of Los Angeles". The song was recorded at Lee's studio called The Atrium in Calabasas, California.

Asked if MÖTLEY CRÜE is actually working on an album, Lee told VEVO, "We just cut that song ['Sex'] to have a track out for the summer, for the tour. And I think musically next for us is working on music for 'The Dirt', the movie [version of the MÖTLEY CRÜE memoir, 'The Dirt: Confessions Of The World’s Most Notorious Rock Band'], or maybe another EP in the near future. I'm not really sure but right now we've got the KISS tour ahead of us and a new summer single and that's kind of right now we're focusing on, but I know the movie's coming up shortly."