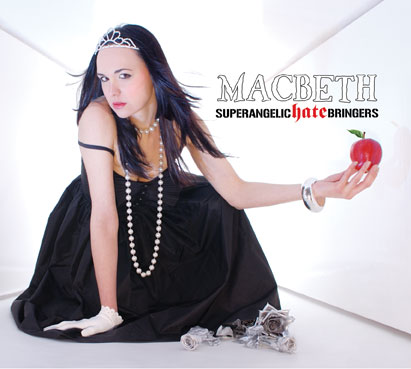 MACBETH To Tour UK Next Spring

Italian gothic metallers MACBETH will embark on a UK tour next spring. Support at the shows will come from the British band KATBGINI. Currently confirmed tour dates are as follows:

MACBETH's video for the song "Without You" can be viewed below. The clip was filmed in Italy with director Mirco Andreis.

"Without You" comes off the Italian band's new album, "Superangelic Hate Bringers" (cover artwork),due on November 16 via Dragonheart Records. The CD was recorded in two different studios, including a private studio in Reykjavik, Iceland and New Sin studios in Italy, where the band also mixed and mastered the album.

According to a press release, "Superangelic Hate Bringers" is "the brilliant new and ambitious album by MACBETH that features ten pieces which go well beyond the confines of pure gothic metal." The album's first single, "Without You", and "To My Falling Star" are said to "offer a new interpretation of gothic metal" while tracks like "Watch Us Die" and "H.A.T.E." are "evidence of how much more aggressive the new sound is." The digipack version of "Superangelic Hate Bringers" will also include the "Without You" video.

MACBETH's last CD, "Malae Artes", was released in March 2005 via Dragonheart Records. The follow-up to 2000's "Vanitas" featured 10 tracks "in the vein of LACUNA COIL, NIGHTWISH and TRISTANIA," according to a press release.