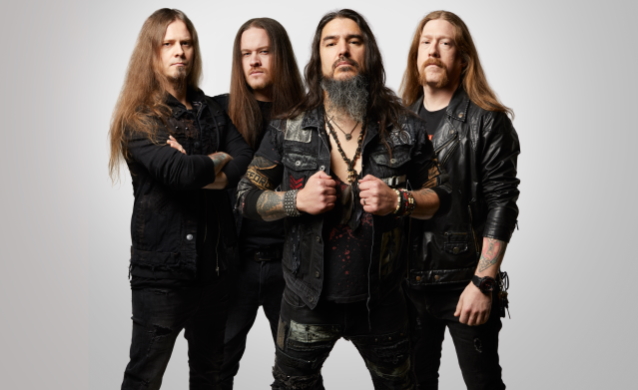 MACHINE HEAD frontman Robb Flynn spoke to Brian Aberback of The Aquarian Weekly about the band's current U.S. tour which features no setlist. Asked how that came about, Robb said: "Over the pandemic, Jared [MacEachern, MACHINE HEAD bassist] and I started doing this thing called 'Electric Happy Hour'. Every Friday afternoon we would jump on Facebook Live and Twitch and YouTube Live and stream, drink beer, and play metal songs. We were all on lockdown; we were all cooped up and couldn't do anything, so it was this very loose, fun, jammy thing. We'd take requests on Facebook Live and we got a lot of people. We'd average about 2,000 people a show. It was pretty fun and then we started doing full-album playthroughs on the anniversaries. We ended up doing about 130 shows. In general, there was no setlist. We'd kind of just make it up. I'd pick the first song about five minutes before we went live and from there we didn't know what we were going to do, we just made it this fun thing and ended up learning like 365 songs between all the MACHINE HEAD songs and then the cover songs. We just wanted to take that and bring that crazy energy to touring once we started again, but it was really fun having this loose structure."

Elaborating on the structure of the current MACHINE HEAD tour, Flynn later said: "We're out here doing a lot of dates and we're not playing a single major market. We're not playing in New York City, we're not playing San Francisco or Chicago. I'm in Sioux Falls, South Dakota right now. We did Fargo, North Dakota last night. We did Missoula, Montana, Boise, Idaho — all these nooks and crannies, all these killer markets and people are starving for it and we love it. That connection in the live environment? That's the ultimate. That's the way to win people over. We've got a major market tour of the U.S. for April through May."

As previously reported, MACHINE HEAD has recruited HAVOK's Reece Alan Scruggs to play second guitar on the "Electric Happy Hour (Live)" fall 2022 tour. Scruggs is filling in for MACHINE HEAD's Polish guitarist Wacław "Vogg" Kiełtyka, who is unable to make the trek due to his touring commitments with his longtime band DECAPITATED.

Reece made his live debut with MACHINE HEAD on November 3 at Strummer's in Fresno, California at the opening show of the "Electric Happy Hour (Live)" tour.

Vogg joined MACHINE HEAD's touring lineup prior to the launch of the band's "Burn My Eyes" 25th-anniversary tour in late 2019.