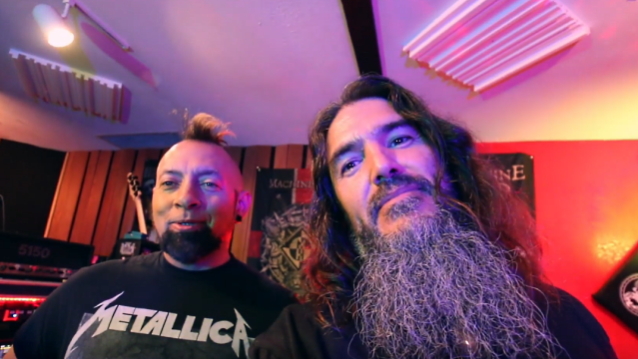 On Friday (July 29), MACHINE HEAD frontman Robb Flynn teamed up the band's "The Burning Red"/"Supercharger"-era guitar player Ahrue Luster to celebrate 23 years of "The Burning Red" with a Facebook Live and YouTube playthrough of the entire album.

Reuniting for the first time in nearly 20 years, Robb and Ahrue delivered crushing renditions of the LP's 10 original songs, including contemporary live classics like "From This Day" and "The Blood, The Sweat, The Tears" alongside deep cuts "Devil With The King's Card" and "I Defy", plus the emotionally heavy "Five" and the title track. And if that wasn't enough, Robb and Ahrue treated viewers to some select "Supercharger" tracks like "Bulldozer" and "Crashing Around You", plus covers of SEPULTURA's "Roots Bloody Roots" and IRON MAIDEN's "The Number Of The Beast".

MACHINE HEAD bassist/backing vocalist Jared MacEachern contracted COVID-19 and was unable to attend the session. However, he managed to record his bass parts for the playthrough while convalescing at home, so the audio quality was not affected.

Released in 1999, "The Burning Red" included the singles "From This Day" and "Silver". The band chose the CD title, and particularly the color red, as a metaphor for the music on the album. "Typically, the color red represents a lot of things, like blood, death, and on the other side, it can represent like love and beauty and lust," Luster said in an interview that was published shortly after the LP's release. "We thought that this record had a lot of contrast to it because it has things that are really heavy going into things that are really beautiful and melodic. The color red is like a metaphor for the record. 'The burning red' just means that it is just that intensified."

MACHINE HEAD's work on its third album did not go unnoticed by the press. Don Kaye wrote in Metal Edge: "On 'The Burning Red', the band seems to have found the perfect balance of musicality, aggression, experimentation, and songcraft, melding an abundance of styles into a seamless whole that is MACHINE HEAD's heaviest, yet most accessible, work to date."

"I think that on this one, we went for it a lot harder and didn't hold anything back," Flynn told Blistering.com. "We tried to challenge ourselves and tried to go places that we hadn't been and other places that other bands were not going."

Back in February 2011, "The Burning Red" was certified silver by the BPI (British Phonographic Industry) for sales in excess of 60,000 copies in the United Kingdom.

MACHINE HEAD's tenth studio album, "Of Kingdom And Crown", will be released on August 26 via Nuclear Blast/Imperium Recordings.