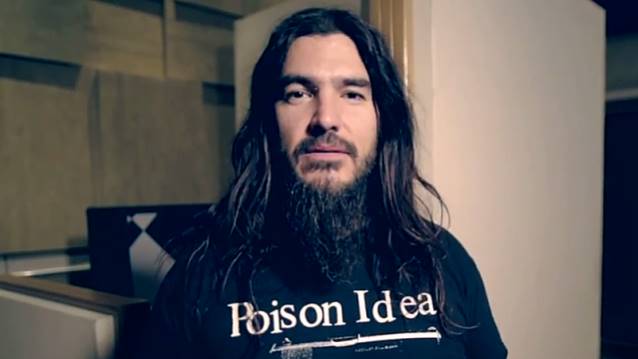 Guitarist/vocalist Robb Flynn of San Francisco Bay Area metallers MACHINE HEAD spoke to U.K.'s Metal Hammer magazine about the progress of the recording sessions for the band's eighth studio album, due before the end of the year via via Nuclear Blast Entertainment.

"There's definitely a lot of urgency on this record," Flynn enthused. "It's a really heavy record arid there's a dark and evil vibe to a lot of it, but I feel like there's more of a rock vibe in there too. It's stripped down at times, and I like that. I think that sense of urgency has carried over from the demos we did, which were all done very quickly and spontaneously. We tried to keep that spontaneous vibe on the album."

MACHINE HEAD's new CD was recorded at GREEN DAY's JingleTown Recording compound in Oakland, California. The artwork for the effort is being created by Brazilian artist Marcelo Vasco, who has previously worked with BELPHEGOR, EINHERJER, DIMMU BORGIR, THE FACELESS, NOCTEM, KEEP OF KALESSIN and BORKNAGAR. Flynn said: "We got turned on to Marcelo's work through Gerardo [Martinez] at Nuclear Blast and let me tell you… this kid has delivered some fucking glory! He took the updated MH 'Lion Crest' that Rafal Wechterowicz (we call him Raf for short) had designed with us, and added this whole other dark trip to it. We've decided to base the album package off of an old Alchemy book, with aged, sepia-toned pages on the insides, alchemy wood-cuts."

Flynn continued: "As we talked about before, one of the things we were so excited to sign with Nuclear Blast about was the next-level, special packages they do for their bands. This MACHINE HEAD setup may be their biggest yet! Just the album alone will come in deluxe CD, vinyl gatefold, and the piece-de-résistance, a red foil and leatherbound 48-page media book with CD. Some album bundles will come with a hard resin MACHINE HEAD diamond logo around the media book. There will be something akin to an 'ultra bundle' as well, which will include a completely custom Epiphone guitar (with the new lion crest artwork) courtesy of Epiphone guitars."

Tentative songtitles set to appear on the new MACHINE HEAD album include "Killers & Kings", "Beneath The Silt", "Eyes Of The Dead" (formerly "Ojos De La Muerte"),"Sail Into The Black", "Now We Die" (formerly "How We Die") and "Night Of The Long Knives".

As part of this year's Record Store Day on April 19, MACHINE HEAD released a 10-inch vinyl single, with the A-side containing the "demo" version of "Killers & Kings". The B-side was a cover version of the track "Our Darkest Days" from one of MACHINE HEAD's favorite bands, IGNITE.

Flynn recently stated about the band's new material: "I would say… that the songs are as epic in scope [as those on 2007's 'The Blackening'], if not more so, except where 'The Blackening' was more epic in the guitar department, this is more epic in the EVERYTHING department. Strings arrangements, keyboard arrangements, massive vocal layering (one track, 'Sail Into The Black' has 40 tracks of vocals),drum overdubs, and, of course, the standard MACHINE HEAD quadruple tracking of the guitars."

He added: "I want to reiterate, I don't feel this record sounds like 'The Blackening'. It feels like we're still moving forward. If I HAD to compare it to another record of ours, it may be closer to 'Through The Ashes Of Empires' in one aspect only, the simpler song arrangements. It's still what I would just call classic metal, but we've simplified beats, simplified riffs, taken the unnecessary complicated-ness of something and made it simple. I've even applied that to my lyrics, where I've stripped out a lot of extra words ('the's,' 'and's,' etc),and invented a lyrical technique I call 'clustering,' where you cluster vowels or cluster 'plosives' ('K's,' 'T's,' 'Ch's') together to make it sound heavier, or flow better. It doesn't read all that poetically, but in the song it sounds really cool. I've also really worked hard on sharpening up my rhyme schemes, finding clever places to place rhymes, instead of the usual place at the end of a line, or even again, 'clustering' rhymes. It makes an abstract concept like 'Killers & Kings' (which references 20+ Tarot Cards, and that I'm very proud of the end result) to have a real meaning. Out of that stripped down musical landscape, we've then taken that new (to us at least) 'extra space' and added in layers of strings, layers of dark, ambient keys, layers and layers of vocals, and it sounds HUGE."