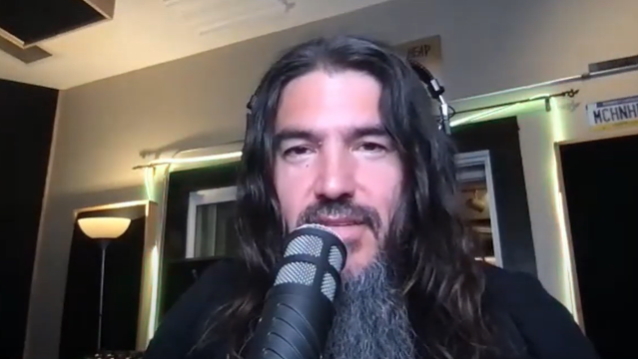 In a new interview with Jorge Botas of Portugal's Metal Global, MACHINE HEAD frontman Robb Flynn was asked what it was like to tour with SLAYER back in 1994 and 1995 when he and his bandmates had just released their debut album, "Burn My Eyes". "It was a dream come true," Robb responded (as transcribed by BLABBERMOUTH.NET). "It launched MACHINE HEAD into the stratosphere. And I've gotta give [SLAYER guitarist] Kerry King a lot of credit for that, man. He really believed in us and took a shot on us.

"I had seen SLAYER more than any other band in thrash metal," Flynn continued. "I used to drive to L.A., to Sacramento, to Fresno. Me and my friends would take road trips to go see [SLAYER]. We fucking lovedSLAYER. And so when we finally got the gig, it was, like, 'Holy fuck. This is amazing.' They took us all over Europe; they took us to America. We did five months with SLAYER. I got to see 88 free SLAYER shows. [Laughs] And I watched every night; there was not a night that I didn't catch at least even part of the show. And I felt very fortunate for that."

Last year King said that MACHINE HEAD was "the only band" he ever "demanded to open for SLAYER." He made the comment while recording a video message congratulating the San Francisco Bay Area act on its 30th anniversary.

Two decades ago, Flynn and King engaged in a public war of words over the latter's incessant public criticisms of some of MACHINE HEAD's recorded output and attacks on the group's integrity. (Flynn famously wrote in a 2002 online post that Kerry was "a lard ass" who's "eaten so many cheeseburgers lately his brain is starting to clog up, and he can't think straight anymore.") In 2008, after the release of MACHINE HEAD's "The Blackening", King and Flynn patched up their relationship, with Kerry telling Midwest Metal in an interview: "When that whole thing went down I essentially blackballed him and his band for, like ten years. And one day it was, like, enough is enough. You guys are making killer records, and if I ever want to have a tour with them, I want to be able to talk with them. [Laughs] That new record ['The Blackening'] is kick-ass."