Scottish death/grind powerhouse MAN MUST DIE will will release its new album, "Peace Was Never An Option", on October 28 in Europe and one day later in North America via Lifeforce Records. The CD features a guest appearance by Max Cavalera (SOULFLY, ex-SEPULTURA) on one song.

The official video for the song "Antisocial Network" can be seen below.

Comments the band: "This album is by far the angriest yet most diverse one we have done yet. It's the next level for MAN MUST DIE. We couldn't be happier with how it's turned out. It's brutal beyond the word and yet more melodic and memorable than ever.

"With 'Peace was Never An Option', we really focused on the songwriting, which is really important in MAN MUST DIE's sound, [and] seems to be bypassed a lot in modern music.

MAN MUST DIE are an extreme metal band hailing from Glasgow, Scotland. Formed in 2002 and originally born of the founding members' desire to push their music to new levels of intensity and brutality, the band's dedication to their craft has since manifested itself in a rich touring history, sharing stages with such acts as EXODUS, MACHINE HEAD and DECAPITATED.

MAN MUST DIE is: 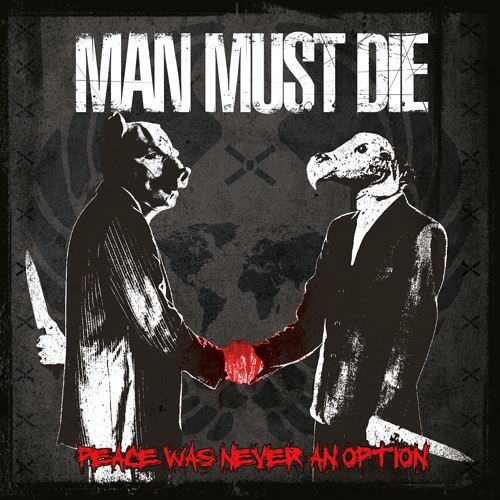 Find more on Man must die