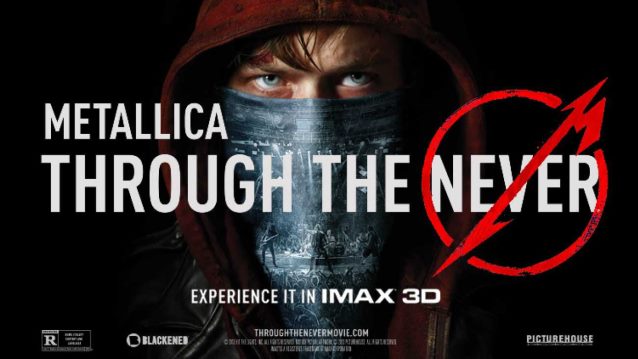 METALLICA: Animated Short, Three 'Through The Never' Cuts To Be Released On DVD, Blu-Ray

METALLICA bassist Robert Trujillo premiered his METALLICA-centered short animated film "'Tallica Parking Lot" at the Fantastic Fest in Austin, Texas on September 25. The soundtrack to the film, which is collaboration with Titmouse Animation studio, has "big, energetic beats as the animations panned through 2D and 3D views of the fans that pre-game at METALLICA shows," according to HitFix. "I wrote most of [the music for] it, but [METALLICA frontman] James Hetfield had a heavy hand in helping me finish it," Trujillo told AMFM Magazine. "It's an original music score by METALLICA. It has some very cool cameos that range from 'South Park' to 'Beavis & Butthead' and Lemmy from MOTÖRHEAD."

He added: "Just like [METALLICA's new 3D movie] 'Through The Never', you're part of the creation of something, and to see it come to life on the screen, especially when it's animated, is really special."

"'Tallica Parking Lot" and three versions of "Metallica Through The Never" will be available on the DVD/Blu-ray and other formats of the release. "Metallica Through The Never" director Nimród Antal revealed that one additional cut of the film is just of the narrative portion to "Through The Never" and has "a completely original," "'Goblin'-esque" soundtrack made by METALLICA and producer Greg Fidelman. The other version is just of the concert footage, with "three to four" bonus songs recorded during those live gigs in Vancouver and Edmonton in August 2012.

"Metallica Through The Never" took in just $3.2 million at the box office in three weeks of release after costing $18 million to make, with the band putting up all the money for the project.

"Metallica Through The Never" opened on September 27 for a one-week exclusive run at IMAX theaters, expanding to more screens around the country a week later.