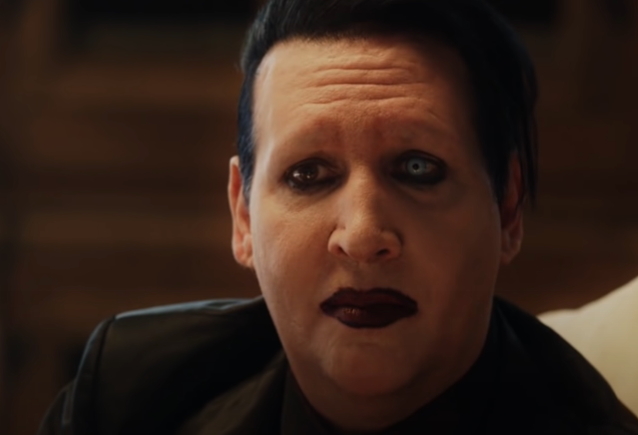 According to TMZ, Marilyn Manson claims his "career is in the gutter" and he's still "receiving threats to his life" after at least 15 women have accused the musician of sexual assault. Three of his accusers, including ex-girlfriend Ashley Morgan Smithline and "Game Of Thrones" actress Esmé Bianco, have filed lawsuits. Manson has denied all allegations, which he has called "horrible distortions of reality."

Marilyn confirmed he was dropped by his record label, Loma Vista Recordings, and talent agency CAA, and has been "excluded from Hollywood social and business gatherings."

Manson claims his music is suffering, he can't tour, he can't release his book, his paintings have been "devalued" and his art shows have been "indefinitely postponed."

Manson said his "false portrayal as a rapist, abuser, and child pornographer" has also caused him to lose two acting roles, Starz series "American Gods" and Paramount+ series "The Stand".

The singer's latest legal move comes eight months after he filed a defamation suit against former fiancée Evan Rachel Wood, alleging that she and her girlfriend conspired to bring him down with a series of coerced sexual abuse allegations.

Manson sued Wood for defamation, emotional distress and "impersonation over the internet," according to a complaint filed with the Los Angeles Superior Court.

In the complaint, Manson accused Wood and her "romantic partner," artist Illma Gore, of recruiting and pressuring women into making allegations against him, and impersonating FBI agents to further coerce the women by making them believe their families were in danger.

Manson alleged in the complaint that the "Westworld" actress and Gore "publicly cast [him] as a rapist and abuser — a malicious falsehood that has derailed [his] successful music, TV, and film career."

Manson later shared the complaint to his social media accounts, writing, "There will come a time when I can share more about the events of the past year. Until then, I'm going to let the facts speak for themselves."

Wood alleged in the documentary "Phoenix Rising" that she was "coerced into a commercial sex act under false pretenses" while filming the 2007 music video for "Heart-Shaped Glasses" with her then-boyfriend Manson.

Manson's attorney Howard King later denied Wood's allegations in a statement to People, claiming that the singer "did not have sex with Evan on that set, and she knows that is the truth."

Wood, who was in a relationship with Manson from mid-2006 until early 2011, claimed in the "Phoenix Rising" documentary that the music video shoot was "the first crime [he] committed against me."

"It's nothing like I thought it was going to be," Wood said. "We're doing things that were not what was pitched to me. ... We had discussed a simulated sex scene, but once the cameras were rolling, he started penetrating me for real. I had never agreed to that. I'm a professional actress, I've been doing this my whole life; I've never been on a set that unprofessional in my life up until this day."

A little over a year and a half ago, Wood named Manson as the previously anonymous abuser she referenced while testifying before the California Senate in relation to the state's Phoenix Act, which extends the statute of limitations on domestic violence from three years to five. In February 2021, Wood claimed in a social media post that Manson "groomed" and "horrifically" abused her for years. After she shared her accusations, several other women posted their own allegations against the singer. The women claimed to have endured "sexual assault, psychological abuse, and/or various forms of coercion, violence, and intimidation" at the hands of Manson.

Manson later released a statement denying the abuse allegations leveled against him, writing on Instagram: "Obviously, my art and my life have long been magnets for controversy, but these recent claims about me are horrible distortions of reality. My intimate relationships have always been entirely consensual with like-minded partners. Regardless of how — and why — others are now choosing to misrepresent the past, that is the truth."