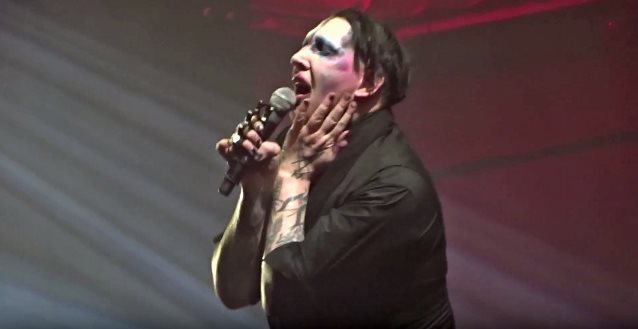 Marilyn Manson was injured Saturday night when a stage prop fell on him while he was playing in New York City.

The incident happened about forty-five minutes into Manson's set at Hammerstein Ballroom as he was performing a cover of EURYTHMICS' "Sweet Dreams (Are Made of This)" .

Manson made his way toward the back of the stage where there was a podium, framed by two giant fake pistols. Fan-filmed video from the concert shows Manson climbing the prop before it wobbled, after which it fell on him. The stage crew and his band members immediately rushed to lift the prop off of him. After a brief delay, the house lights came up and an announcer said that the show was being canceled "due to injury."

His publicist, Carrie Tolles, said that "Manson suffered an injury" towards the end of the concert and "is being treated at a local hospital." Another source told Variety that the singer was "fine" despite being hospitalized.

A fan who watched the concert from the second row told the New York Daily News: "It was so fast, at first I thought it was part of the show. But then I saw the guitarist's face, and the faces of some of the others who rushed over and they looked scared — really scared. I was like, 'Oh, this is not a joke.'"

Manson lay motionless as the crew rushed to lift the prop off him.

"He moved for a minute at first, but then he was still," the fan said. "They turned off the lights but we could see they were trying to cover him with a blanket."

One day earlier, Manson hopped off stage during his concert in Pittsburgh. After making his way back to the stage, Manson told the crowd, "I just broke my ankle, but it's okay."

He is on the road supporting his upcoming album, "Heaven Upside Down", which will be released on October 6. On the disc, he reunites with producer and film composer Tyler Bates following an epic collaboration on Manson's critically acclaimed 2015 release, "The Pale Emperor".