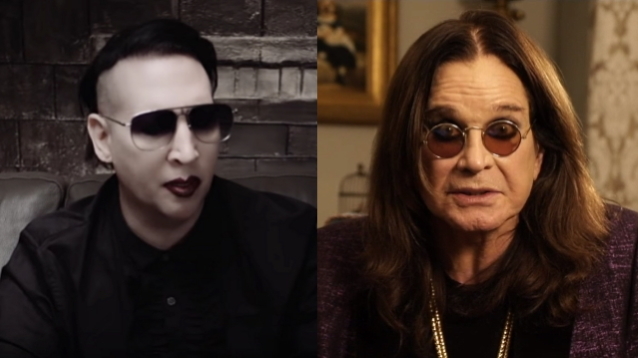 Marilyn Manson spoke to Consequence Of Sound about the influence that Ozzy Osbourne has had on his career, and he reminisced about his early exposure to the legendary BLACK SABBATH singer's music.

"I remember getting [Ozzy's solo debut] 'Blizzard Of Ozz' when I was in Christian school," Manson recalled. "My mother took me to get it at the record store when it was highly frowned upon and forbidden in Christian school. But I just remember that he had this strange mystique that he's never really escaped from, despite the fact that he even had a reality TV show. Somehow his music outlived that [show]. That's something I would not have done, 'cause I would never want to share my personal life on reality TV. But his music completely exceeds that, which I find to be amazing."

Manson continued: "I remember having a 'Shot In The Dark' poster on my wall, in 10th grade, I think, and it was so great to have gotten to tour with him and with BLACK SABBATH as well. And he's always been a very quiet and interesting person. We bonded over painting, strangely enough, at one point on tour."

Manson was originally scheduled to support Osbourne on tour this year, but those dates were canceled so that Ozzy could fully recover from several medical issues he suffered in 2019, including a fall, neck surgery and hospitalization for the flu.