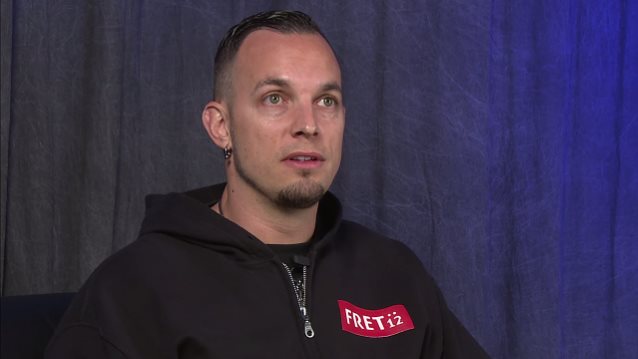 HardDrive Radio recently conducted an interview with ALTER BRIDGE and CREED guitarist Mark Tremonti about "Cauterize", the second album from his TREMONTI band. You can now watch the chat below. A couple of excerpts follow (transcribed by BLABBERMOUTH.NET).

On how he decides a musical idea should go to TREMONTI and not ALTER BRIDGE:

"The ALTER BRIDGE and TREMONTI division of where a song's gonna go is kind of a gray area, where back when it was CREED and ALTER BRIDGE, it was more distinct; it was kind of black and white. ALTER BRIDGE is getting heavier and heavier, and TREMONTI has already started out heavy. I think some of the stuff that I write that seems to be more atmospheric and epic, I tend to think Myles [Kennedy, ALTER BRIDGE singer] would be able to pull that off better than me vocally. I don't wanna ever limit a part's… what it can be by me singing on it when Myles can do just so much more with it vocally. But, usually, between the two bands, eighty percent of the time, it's whatever's best at the moment is going on that album."

On on the status of bassist Wolfgang Van Halen, who played on "Cauterize" but is not part of TREMONTI's touring lineup due to his commitments with his main band, VAN HALEN:

"I'm so bummed and happy at the same time, 'cause he gets to do VAN HALEN stuff. But VAN HALEN stuff just popped up right in the window of us doing the first tour off this record. But, you know, from the get-go, [TREMONTI] was supposed to be a solo band where, if a member has to come and go for doing something like that, I'm open-minded to it; they can come back. I do it with ALTER BRIDGE; Myles goes with Slash and he comes back to ALTER BRIDGE. I think it's when it's your very first band, when a member does that, everybody cuts him out. But nowadays, I've been with so many different musicians, if somebody wants to go and do something, and it's a reasonable thing, obviously… I told Wolfgang, I'd do the same thing. If I was touring with VAN HALEN? VAN HALEN or the TREMONTI tour — I'd be going with VAN HALEN."

"Cauterize" was released on June 9 via Fret12. The follow-up to 2012's "All I Was" was helmed by producer Michael "Elvis" Baskette, who previously worked with ALTER BRIDGE and SLASH.

TREMONTI actually recorded two albums' worth of material during the "Cauterize" sessions and will release another full-length disc called "Dust" "probably within a year."