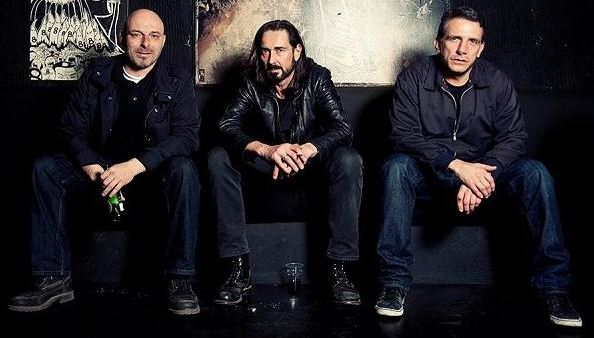 "Three years ago we started rehearsing together for our reunion tour after a break of 15 years. We thought it was going to be a matter of a few shows. Now, after three years, we have performed 27 shows all over the world! I cannot find the words to describe how much i enjoyed every single gig.

"I want to thank every single one of you for coming to the shows and giving us such a fantastic time. It was a great pleasure to perform for you, shake your hands and sometimes have a drink and a chat after the show.

"Many thanks to all the promoters that booked us; without you, we would still be sitting in our bunker rehearsing.

"I'm very sorry the shows we had hoped to do in Mexico, South America, Japan and Australia never happened. I was looking forward to those very much...

"The following is not easy to say, and believe me, I have given it a lot of thought.

"I will leave CORONER at the end of February this year.

"I think we have played more than enough reunion shows and now it's time to either stop doing reunion shows or to move on with a new album. For me, it was clear from the start that I didn't want to record another album. I love the sound of CORONER, but for me, it's the moment to explore new sounds without the weight of the past on my shoulders.

"Ron [Broder, a.k.a. Ron Royce, bass/vocals], Tommy [Vetterli, a.k.a. Tommy T. Baron, guitar] and I agreed that CORONER should continue with another drummer. They will announce who it's going to be on the CORONER reunion page.

"With all my heart, I wish 'em all the best for the future. We will be brothers forever.

"I will continue with a new band that you will hear about in the near future.

"So thank you all once more and I hope we are gonna see you very soon!"

While subsequent bootlegged CDs included the bonus tracks of "Arrogance in Uniform" and "Hate, Fire, Blood", the original four-track demo consisted of the following tracks: "Spectators of Sin", "Spiral Dream", "Aerial Combat" and "The Invincible". (Only "Spiral Dream" would make it onto CORONER's 1987 debut LP, "R.I.P.")

According to The BNR Metal Pages, CORONER "progressed from the raw speed of 'R.I.P.' to the more laidback style of 'Grin', releasing five albums (not counting the semi-compilation 'Coroner' album) that are all different and yet all are undeniably related, and undeniably CORONER. The band called it a day in 1994, actually before the release of 'Coroner', with Marky Edelmann joining APOLLYON SUN and Tommy T. Baron going to KREATOR, though neither is still with those bands."