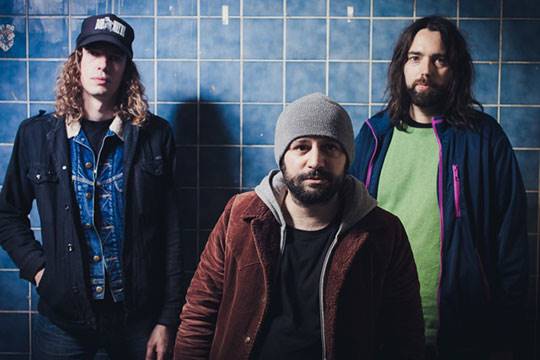 Considered one of the greats of the European stoner rock scene, MARS RED SKY has gained international recognition due to a unique sound, based on thick infectious grooves and melodic aerial guitar riffs. This is truly a one-of-a-kind experience, wrapped up by Julien Pras' ethereal vocals, Matgaz' powerful rhythms and Jimmy Kinast's pachydermic bass lines. Somewhere between doom metal and '70s psyche pop, MARS RED SKY intrigues and attracts the masses to celebrate this cosmic ritual of solar burning fuzz and reverberated atmospheres.

Driven by the huge success of their eponymous debut record, recorded in Spain's mystic Bardenas Desert and released in 2011, the band was invited to play on the largest European stages with KYUSS LIVES!, DINOSAUR JR. and SLEEP, as well as popular festivals like Eurockéennes de Belfort, Roadburn, London and Berlin Desertfests, Sziget Festival and SXSW (USA). All in all, MARS RED SKY has played in more than 20 countries.

With their incredibly heavy and hypnotic performances, MARS RED SKY has been considered one of the most thrilling live acts among the international stoner rock scene. In 2012, they paired up with French doom metal monsters YEAR OF NO LIGHT to release a three-track split record, which sold out in a blink of an eye.

The release of their "Be My Guide" EP in 2013 opened the path for an extensive tour across Europe, then across the Atlantic for gigs in Latin America. This is where the band recorded their new album, due out this spring on Listenable Records. A limited-edition seven-inch EP containing exclusive material will be released in March.