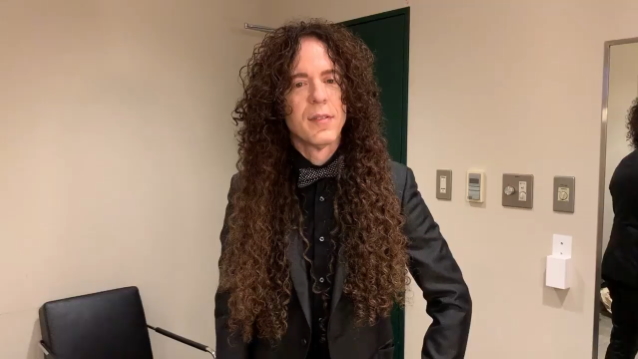 MARTY FRIEDMAN On How He Has Dealt With Pandemic: 'I'm One Of The Very Fortunate Ones'

Former MEGADETH guitarist Marty Friedman spoke with Darren Paltrowitz — host of the "Paltrocast With Darren Paltrowitz" — about how he has spent his downtime during the coronavirus pandemic. He said: "I've held up pretty good. I've been lucky. A lot of my friends have been all on tour, and the plug got pulled, or worse yet, just before a tour where you rehearsed and done pre-production, rented gear and vehicles and all that, and then the plug [gets pulled]. I've heard horror stories. I had none of that. I had a tour coming up that got canceled before we started money spending. And I've had a tour postponed, I've had Tokyo Marathon opening ceremony postponed. But aside from that, really, I've been lucky. It gave me much more time to work on 'Tokyo Jukebox 3'. My family's healthy, I'm healthy, and I've had a lot of time to do work that I needed to get done, with 'Tokyo Jukebox 3' and two videos made and a lot of other projects that, frankly, wouldn't have got done if it weren't for COVID. So I'm almost thankful. I'm not thankful for the way it happened, but I'm thankful for the chunk of time that it allowed me to do other work. So I'm one of the very fortunate ones."

Friedman will release his new studio album, "Tokyo Jukebox 3", on April 16 via The Players Club/Mascot Label Group. The record, which was made available in Japan last October, is the third in a series that began with "Tokyo Jukebox" in 2009, and then "Tokyo Jukebox 2" following in 2011. The trilogy presents Friedman's inspired performances to Japanese repertoire he's chosen to cover.

As previously reported, Marty's long-awaited documentary, titled "Spacefox", will tentatively arrive later this year. The film, which is being directed by Jeremy Frindel, the founder of Substratum Films, follows Friedman's reinvention from lead guitarist in MEGADETH to one of the most famous TV personalities in Japan.

Last June, Friedman released a "Home Jams" version of his song "Self Pollution", which originally appeared on his 2017 album "Wall Of Sound". The new rendition of the song featured Friedman, along with his longtime bandmates Kiyoshi (bass) and Jordan Ziff (guitar),plus Anup Sastry (drums). The split-screen video was filmed in Tokyo, Osaka, Phoenix and Baltimore, with each musician separated in his or her home.

Friedman's latest live record, "One Bad M.F. Live!!", came out in October 2018. The album was recorded in Mexico City on April 14, 2018 during the final concert of Friedman's world tour in support of "Wall Of Sound".