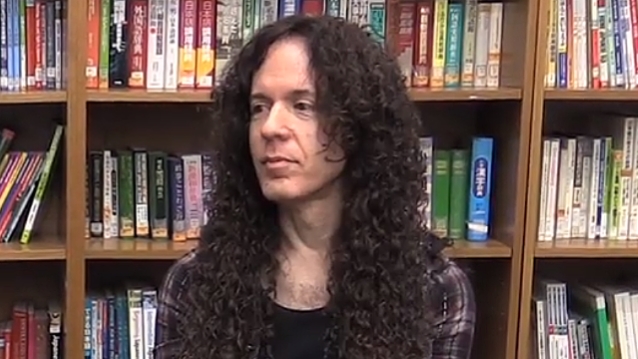 Three years after leaving MEGADETH, Marty Friedman moved to Tokyo, Japan, where he's now lived for 15 years. During that time, he's worked with a number of key figures in the domestic Japanese music world while continuing to write and release instrumental rock guitar albums of his own.

During an October 15 appearance at the Japan Foundation in Los Angeles, Friedman spoke at length about how heavy metal is perceived in his current home country. "In Japan, I think it's less of a scene," he said. "In America, the genres are strictly separated. That's why you call it a scene — it's a metal scene; it's an underground metal scene; you see all your friends at the metal gigs. It's like a clique. In Japan, it's just kind of like this big music scene, and the sound of heavy metal finds itself in all different kinds of music there. Idol music very often has heavy metal motifs in it. Dance music often has heavy metal motifs in it. Visual kei, if you just took away the image and just played the music, that stuff is really, really, really heavy metal. It's not like you've got to join this 'scene' to play or listen to heavy metal in Japan.

"Things that are heavy metal are also mainstream," he continued. "You look at something like MAXIMUM THE HORMONE, which is, like, ultra-, ultra-metal — full-on aggro metal — but a lot of the activities they do are very, very mainstream. [Japanese record stores display] Mariah Carey [next to] MAXIMUM THE HORMONE... and the same people buy both of them. This is one of the things I like about Japan. In America, I grew up, 'Metal or die,' but in my heart, I was like, 'I like all this other stuff, but I can't admit it to my friends.' Over there, there's no stigma."

Friedman also spoke about the major difference between performing in Japan and in other countries around the world. "No cell phones," he said. "They don't allow them. I was just at a classical concert, and after the concert was over — it was, like, a curtain call — they said, 'If you want to take a picture, take it now.' People tend to listen to the songs and applaud before and after, which is kind of unnerving, because when you're playing, there's no noise. You've got to be perfect; if you do something wrong, they notice. [Elsewhere], they're just going off the whole time. That's why we recorded our live album in Mexico City."

Friedman's 14th solo record, "One Bad M.F. Live!!", was released on October 19. The album was recorded in Mexico City on April 14 during the final concert of Friedman's world tour in support of his 2017 album "Wall Of Sound", which debuted on Billboard's Heatseekers chart at No. 12.

Joining Friedman on "One Bad M.F. Live!!" are his bandmates Kiyoshi on bass, Jordan Ziff (RATT) on guitar and Chargeeee on drums.