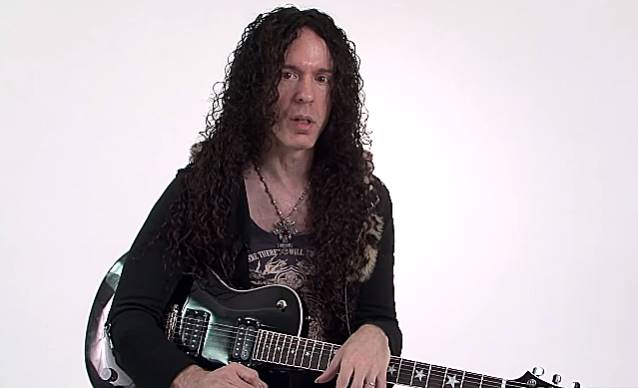 "Undertow", the new video from former MEGADETH guitarist Marty Friedman, can be seen below. The clip features an unsullied look at Japanese culture, says Friedman, who moved to Japan in 2003.

"'Undertow' gives you a look at the Japan not usually seen by the typical Japanese exports, like crazy TV shows, ultra-cute singers and anime," he says. "It shows a day in the life of Japan as the Japanese see it, not the stereotypical Western 'Japanophile' view of it."

Regarding the video's concept, Friedman explains that "the 'Undertow' video attempts to show that when you see a thing of beauty, there is often an undercurrent of true sadness and hardship behind the scenes which creates the motivation to do something extraordinary."

Friedman recently spoke to Wondering Sound about his decision to leave MEGADETH in 1999 in order to make the kind of music that he was passionate about: Japanese pop music, or J-Pop, which Friedman calls "embarrassingly happy."

"I found myself touring with MEGADETH, and in my hotel room I'd be blasting this Japanese music all the time. What's wrong with this picture?" he said.

Marty's new solo album, "Inferno", sold around 2,100 copies in the United States in its first week of release to debut at position No. 186 on The Billboard 200 chart. The CD was released on May 26 via Prosthetic Records (except in Japan, where the album was made available through Universal Music).