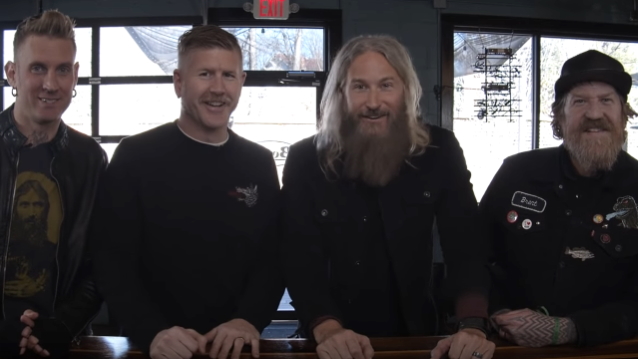 Atlanta progressive metallers MASTODON have released a short video in celebration of the band's 21st anniversary. The band wrote in an accompanying message: "MASTODON is officially of drinking age! Yay! Thanks to all of our supporters who have stuck in with us over the years, and for the new ones, welcome to they party! It's been a crazy journey so far! Can't wait for the day we get to play live for ya! Until then, we'll keep working away on new music."

Last year, when MASTODON celebrated its 20th anniversary, MASTODON drummer and vocalist Brann Dailor told Revolver that it was "pretty crazy" to know that the band was two decades old. "I remember being on my first European tour with TODAY IS THE DAY, and we were out there with NEUROSIS and VOIVOD," he said. "Both those bands had been around for, like, 10 or 15 years at that point, and I thought it was crazy that you could be in a band for that long. [Laughs] When we were in Seattle recording 'Leviathan', I went to the MELVINS' 20th-anniversary show, which I thought was an insane amount of time to be in a band. And now here I am. [Laughs] I'm in one of those bands."

He continued: "But I'm super proud of everything we've done, of all the music and art we've produced, and that we're the same four idiots. [Laughs] Relationships are difficult, you know? Most bands that have been around this long don't have the same members. We spend a lot of time together on the road — not recently, of course — and a lot of drunken craziness has happened. And we've survived it."

Last fall, MASTODON recruited David Bottrill (TOOL, STAIND) to produce the band's eighth studio album. The follow-up to 2017's "Emperor Of Sand" is being recorded at West End Sound, which is located inside of Ember City, the rehearsal facility that members of MASTODON manage in Atlanta.

MASTODON's new disc will mark the band's first collection of new material since the death of longtime manager Nick John and the passing of tour manager Bob Dallas.

"Bill & Ted Face The Music", which reunited Alex Winter and Keanu Reeves in the title roles for the first time since 1991's "Bill & Ted's Bogus Journey", was released in August.