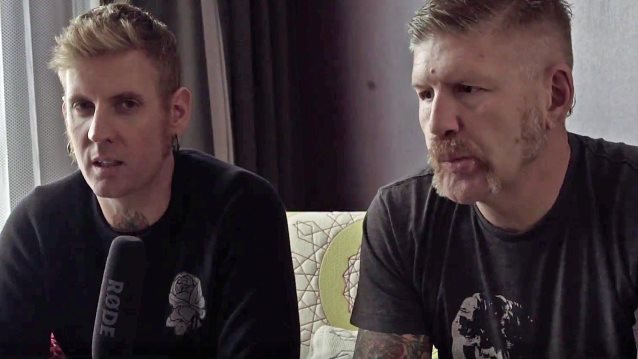 PitCam.TV recently conducted an interview with guitarist Bill Kelliher and drummer Brann Dailor of Atlanta progressive metallers MASTODON. You can now watch the chat below.

Speaking about MASTODON's decision to keep most of the details about its eighth album, "Emperor Of Sand", a secret until shortly before the disc's release, Brann said: "I guess it's all kind of based on my own personal experience with albums dating back to my childhood when I would get excited about an album coming out. There was absolutely no way that you could get any information about the album except for through maybe a rock magazine or something like this. There was no YouTube and there was no leaked albums. You couldn't get the new SLAYER album before it came out. "

Added Bill: "If you saw a picture of it before it came out, you would be excited about it."

Continued Brann: "I'd be excited about that picture. And I think that those were probably all planned events by the management team and the band themselves, discussed amongst each other — what they were gonna do, how they were gonna roll out their campaign. So we like to treat our campaign similarly. It's much harder to keep your album cloaked in secrecy these days, but we like to tantalize our audience with little bits of information here and there that come out and build anticipation much like you would for Christmastime."

Stated Bill: "If you start putting out too much information out too soon — it's, like, you put the album cover out, all the [song] names and everything — everyone's, like, 'Okay, it's been two months, three months. Why haven't you put the record out yet?' Because when you're dealing with record companies and they have a lot of bands that they have a certain cycle and they come out at certain times… Every time we record a record, it's not like it just comes out the next month or the next week or whatever; it always takes a lot of preparation for a proper… you know, the anticipation factor. You've got to pump up each market."

Added Brann: "To try to get people excited about it and let everyone know that it's coming. And hopefully they're happy."

Said Bill: "A lot of times, in this day of the Internet, information goes from one person and spreads like wildfire to a million people in a couple of days. So you don't want the record to leak out there, because then no one will buy it. In this day and age, people barely buy records anymore in the first place. So we're trying to still hold on to that Christmastime surprise."

Released on March 31 via Reprise Records, the follow-up to 2014's "Once More 'Round The Sun" was recorded at The Quarry Recording Studio in Kennesaw, just outside MASTODON's hometown of Atlanta, with producer Brendan O'Brien (PEARL JAM, NEIL YOUNG, AC/DC, RAGE AGAINST THE MACHINE),who first worked with MASTODON on their seminal 2009 album "Crack The Skye".

The typically stunning "Emperor Of Sand" album artwork was created by Alan Brown, a.k.a. Medusawolf, who is also responsible for the inside gatefold images.