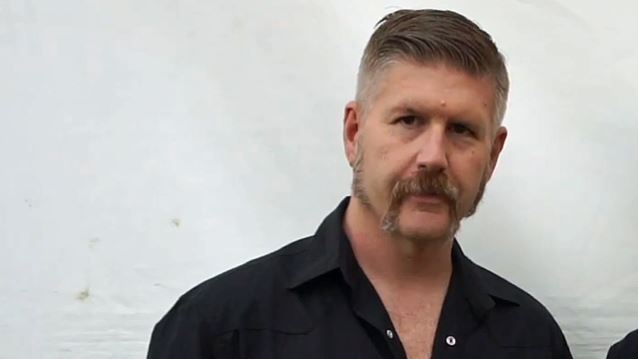 MASTODON To Enter Studio In October Or November

Atlanta progressive metallers MASTODON will enter the studio in the fall to begin recording their seventh album. Guitarist Bill Kelliher told MikeJamesRockShow.com about the writing sessions for the follow-up to 2014's "Once More 'Round The Sun": "Me personally, I've put together about eleven songs in my own studio, myself, just in my down time. Once we get home from this [European] tour, we're all gonna try to get in and hone in on it and put it into each other's hands so everyone can kind of make it a MASTODON record."

He continued: "With the eleven songs that we've recorded so far, it's mostly been Brann [Dailor, drums] and myself. I mean, he lives down the street from me, we grew up together and we write together.

"Once we get home, we're gonna just pick up where we left off. But we're pretty well ahead of the curve. Like I said, there's about eleven, twelve solid ideas, full songs that are there with vocals and everything. It's just a matter of finetuning [them] and cutting pieces outta here and there."

Kelliher added that MASTODON is hoping to enter the studio pretty quickly in order to capture the vibe of the new material.

"Our plan right now is to start recording in October, November," he said. "So pretty soon. We've gotta keep it fresh. You write something, if you let it sit too long, if it's not completed and recorded… It's not as fresh as when you first come up with the ideas and you record it right away, because that's when you really hit the nail in the head."

Earlier this month, Dailor said that MASTODON's next album would likely be "more proggy" than its predecessor. He said: "It sounds like MASTODON to me but an updated version. We always try to push to hear something new and hear something different, so that's what's going on.

"It's impossible to tell somebody what something sounds like, so I'll spare the details. But so far so good — we go with what we know, play what we like, and if we don't like it, we don't play it."