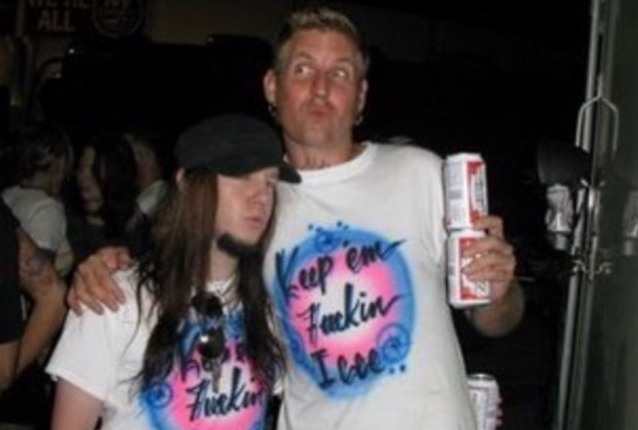 MASTODON's BRANN DAILOR: JOEY JORDISON Was 'One Of The Pillars Of Metal Drumming'

In a new interview with Knotfest.com, MASTODON's Brann Dailor once again paid tribute to his longtime friend Joey Jordison, saying the late SLIPKNOT drummer was "one of the pillars of metal drumming. He will always be that, you know," he added. "He's up there with Vinnie [Paul Abbott, PANTERA] and [Dave] Lombardo [SLAYER] and all those guys. It's huge, his contribution. I mean, there's a whole genre of music that kind of sprung up around what SLIPKNOT put forth. And he's the heartbeat of it all — he was the driving force. The drums are really fucking loud on SLIPKNOT records for a reason."

Dailor went on to say that Jordison's recent passing has given him the impetus to "give that little bit extra" when performing live in his memory.

"I bet he wants to be there and he can't, and so I'm like… I don't know… There's this feeling that I'm having when I'm playing that I want to do better and play better for him somehow," he explained. "I don't know. It's kind of weird. But yeah, that's how I feel about it. Because I really do. I just feel terrible that things ended up the way that they did. But then, you know, there was nothing anybody could do."

Dailor previously discussed Jordison's passing two months ago during a appearance on "The Jasta Show", hosted by HATEBREED frontman Jamey Jasta. After Jasta noted that Joey "lived more in 46 years than a lot of people live in a hundred," Brann said: "It was grandiose. That's for sure. Everything he did was big, and his personality was huge, even though he was just a little guy. The kid was hilarious, and it was always so fun to hang with him, just 'cause he was just a little crazy ball of energy. And his mind was just going constantly — ideas, ideas. [He was] a funny dude. I got along with him right off the bat.

"I think the first time I ever met him was on tour with you guys [HATEBREED] and our first time ever doing any kind of arena anything over in the U.K. with you guys and SLAYER and SLIPKNOT," he continued. "And we got there the day before for the production day, and I saw him checking out our soundcheck or whatever. And I went over and talked to him when we were done. We were pretty close friends ever since then — just on that tour. I rode on their tour bus a bunch of times and just had some nights. It was pretty wild. But it was really fun.

"Joey and I, I don't think we ever talked about drums or drumming or other drummers. Maybe very occasionally. He was a lot like me in that regard where he loved playing drums, loved doing that thing and loved being on tour and being in a band and doing the whole thing but rarely talking about gear.

"He was a total sweetheart guy — amazing with the fans," Dailor added. "He'd be out there forever talking to 'em and just telling 'em how grateful he was. It never looked like he got bored or disinterested in what this 13-year-old kid is telling him about playing drums. It almost makes you forget how phenomenal of a player he was. And then you sit and watch him and you're, like, 'Jesus Christ! The stuff that this guy is pulling off is just insane.' What a monster player he was. And so influential — not just staying in his own lane, but his influence is felt in many different genres, I think, of people sort of emulating the different things that he would do."