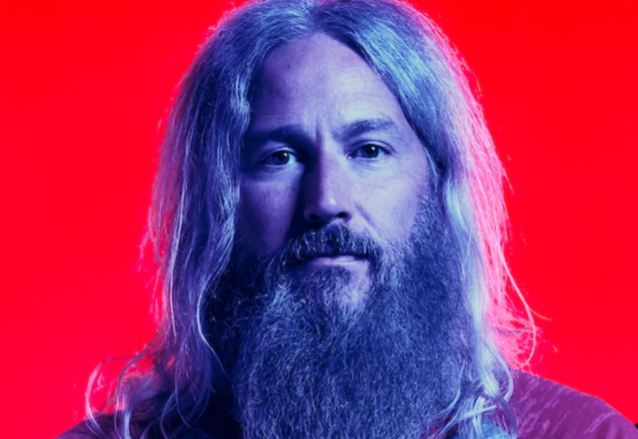 MASTODON's TROY SANDERS: Going Back On Tour After Pandemic-Related Break Was 'Really Fantastic'

During an appearance on the latest episode of the "Rock & Roll Beer Guy"podcast, MASTODON singer/bassist Troy Sanders spoke about what it was like returning to the road for the first time since being forced to take a pandemic-related break. He said (as transcribed by BLABBERMOUTH.NET): "It definitely changed perspective for myself — and probably most people that kind of depended on, 'There's always gonna be a bunch of tours to do. There's always gonna be crowds there. There's always gonna be that opportunity.' But not the case. And it always takes those moments when something gets stripped away before you kind of realize the importance of it — the whole 'don't know what you've got till it's gone' kind of mentality.

"When we went back out to do a run across the States with OPETH — we did two legs of that so far this year, and they were both fantastic," he continued. "We just returned from 35 days across Europe and U.K., Scandinavia, and that was great too. So to taste the U.S. crowds, as well overseas, it's very evident that people are out and they're back and they're excited and they missed it equally as much as the artists that travel and kind of depend on it for their livelihood. So, overall it was really fantastic.

"That energy, I always call it the magic that happens between a fanbase or a crowd and people onstage, whether I'm at a show and feeling great or onstage and the overall vibe and energy is really great, that's magic," Troy explained. "And that can't be done with a livestream. That's why people, instead of just watching a whole set on YouTube, they wanna pay the big money to go see the damn show, 'cause that energy happens once. I still go spend tons of money for concert tickets or sporting events, because, yeah, I can watch it on the TV from the comfort of my home, but when you go there, there's something special there. If you have the ability and the money to buy these tickets — sports, concerts, all the above — it's pretty special. So I'm really, really glad that it's back, that's for damn sure. I speak for my whole band when I see that. Because there was a while there where it was, like, 'Wow. Do we need to get [regular] jobs and just maybe get together and record music for fun? What's happening?' That uncertainty was very bizarre. And I didn't like it."

MASTODON's ninth studio album, "Hushed And Grim", was released in October 2021 via Reprise. The follow-up to 2017's "Emperor Of Sand" was recorded at West End Sound, which is located inside of Ember City, the rehearsal facility that members of MASTODON manage in Atlanta. Helming the effort was Grammy-winning producer/mixer/engineer David Bottrill, who has previously worked with MUSE, DREAM THEATER and TOOL, among many others. The creative process for "Hushed And Grim" was largely influenced by the untimely death of MASTODON's longtime friend and manager Nick John.

John, who also managed GOJIRA, passed away in September 2018 from pancreatic cancer.

Last fall, Sanders told Classic Rock magazine about the musical and lyrical inspiration for "Hushed And Grim": "There was no way we were going to approach this album without addressing how magnificent Nick's impact was on us, as four individuals and as one band. There was no way we could ignore that. It seemed too large of a moment in our lives to not write about it. It was too monumental and too devastating for us to say: 'We're not going to think about that. We're going to write some fun, happy rock songs.' It doesn't work like that with us. From day one, we've always pulled authentic emotions into our lyrics, our story writing and our riff writing. It always comes from within. Nick not only made us better people, but he took our band under his wing and brought us to new heights that we never had dreamt of. This album is us honoring his memory and showing our gratitude for how he touched our lives in the most incredible ways."