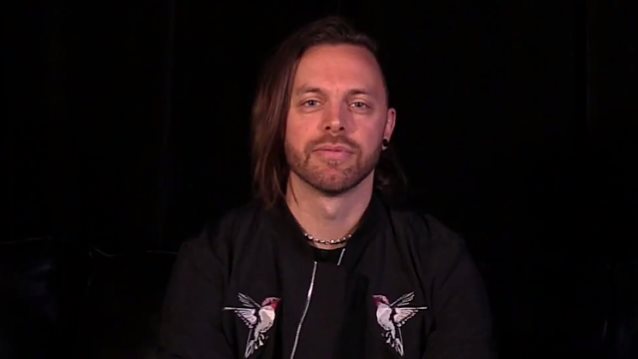 MATT TUCK On Next BULLET FOR MY VALENTINE Album: 'We Just Wanna Make Bigger Songs'

A Music Blog, Yea conducted an interview with guitarist/vocalist Matt Tuck of Welsh metallers BULLET FOR MY VALENTINE on June 22 at the Phoenix Concert Theatre in Toronto, Ontario, Canada. You can now watch the chat below.

Asked about the status of the songwriting sessions for BULLET FOR MY VALENTINE's upcoming follow-up to 2015's "Venom" album, Tuck said: "It's still early days. We're still in the writing process, demoing and stuff like that. So there's a long way to go. But I think we've got, like, seven songs kind of in the making. And I'm really, really stoked. It's gonna be good."

According to Tuck, BULLET FOR MY VALENTINE has been working on the upcoming disc "only sporadically since around April. We've been doing random sessions here and there," he said. "We haven't gone to a studio and just been there for months. We've been doing a week here, a week there, two days here, two days there, ten days here, a week there… So we've been having sporadic bursts of creativity and then going away for a little bit. 'Cause we found, after the first session we did, like ten days, and after seven days, we all just wanted to stop. So the creative juices, after about four days, were not flowing. So we've decided now we're gonna do it in little bursts like that, and it's been really good."

Matt said that BULLET FOR MY VALENTINE's latest song, "Don't Need You", which was released as a standalone single last November, is "pretty much" a good indication of what fans can expect to hear on the band's next album. "There's some stuff in that vein, and there's a lot of other stuff we've been working which is… kind of a… not new direction, but we wrote two or three songs which are kind of a different sound for us, but we're really happy with, so we're gonna see how that goes, really," he said.

"Venom" came out in August 2015. The CD marked BULLET FOR MY VALENTINE's first release since the departure of longtime bassist Jason James and addition of Jamie Mathias (formerly of REVOKER).

Longtime BULLET FOR MY VALENTINE drummer Michael "Moose" Thomas has not played with the group since early last year when he stepped away to spend time with his wife as they awaited the birth of his first child. He has since been replaced on tour by Jason Bowld (PITCHSHIFTER, AXEWOUND).